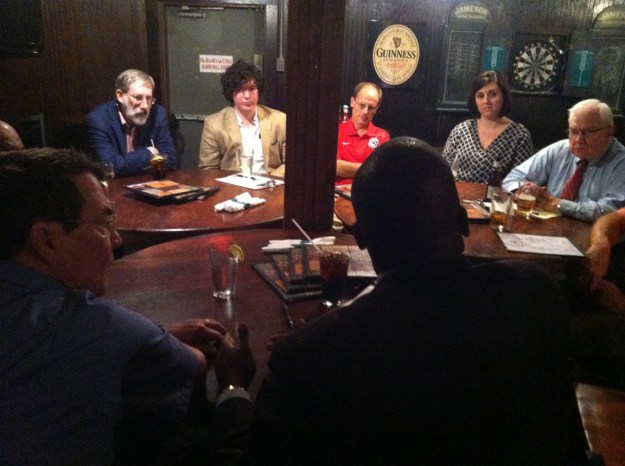 I thought about calling this “Ivy Day in the Committee Room Redux,” but I’d used that gimmick before. You can see how I’m tempted when I attend a small political gathering in the back room of an Irish-themed pub.

Anyway, I went to another of Jack Van Loan’s Kaffeeklatsches with Mayor Steve Benjamin, and he talked with the folks there (a group invited by Jack, who is a Benjamin supporter) about a number of issues. 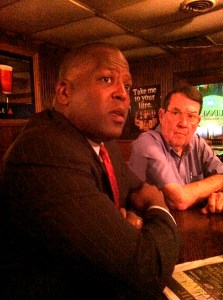 When I entered the room, he was talking about economic development, and saying, “Cities grow from the inside out.” Which is kinda why those of us who look (admittedly, from the outside, Kathryn) upon Columbia as a whole, instead of through the lens of this or that neighborhood, tend to like such things as the strong-mayor initiative.

He went on to say later why development is so important in the Vista and Five Points and Main Street and other commercial corridors, and why it was so important to get Bull Street going — the fact that one of Columbia’s “skyscrapers” (he used the word somewhat ironically), such as the Capitol Center (SC’s tallest building, where the Cap City Club is) or the new one next door with EDENS and McNair Law Firm, or Nelson Mullins’ Meridian Building, brings in more tax revenue than a 600-home residential development.

Hence his emphasis on “vertical development.”

Look south from the Capital City Club, he said, and if you see five buildings taller than four stories that are on the tax rolls, “you’ve done something special.” The view in the other three directions are similar.

Not that he would give up such key drivers of the local economy as USC, Fort Jackson and state government, but if you’re going to keep the city going, it needs more tax base.

Then he talked about strong-mayor. Most there were for it. One man said he’s for it, but friends he was going to see tonight were not, and he wanted to know what to tell them when they say, “What about cronyism?”

Benjamin answered diplomatically, possibly because I was there (and Charlie Nutt, the new publisher of Free Times, as well). He said something vague about how cronyism could occur under other systems as well. What I would have said, of course, is that you’ve got cronyism now; it’s just harder to see. If everyone, from voters to media, has a strong executive to focus on, you know where to look for cronyism. This or that person is connected to the mayor. Much, much easier to spot than with a little-known city manager who reports to seven bosses.

The mayor said one thing about strong-mayor that surprised me. Maybe he’s said it before, and I missed it.

He said that he would NOT hire a professional administrator to oversee the rest of city government and report to him. He said that all of the department heads — with special emphasis on the police chief — would report directly to him.

This sounds good — “buck stops here,” and all that. And indeed, when he said it, Jack muttered, “Damn right.”

But I questioned it. I said, couldn’t you have the best of both worlds? Wouldn’t it answer the concerns of the Howard Duvalls of the world, who say that the current system is better because you have a professional manager in charge, while you can’t guarantee an elected mayor would have any administrative skills.

Benjamin conceded the point, and emphasized that he hasn’t really fully thought out all the details of administration should he be re-elected and strong-mayor passes. First he’s working on he re-election, and after that will “focus like a laser beam” on the strong-mayor issue.

But he defended his statement about no administrator by expressing his concern that such a position could dilute the accountability that is the best feature of strong-mayor.

And, he added sort of jokingly, hiring a manager wouldn’t really satisfy Howard Duvall. He had a point there…