Yesterday, Kathryn said something about the Tea Party and the deliciously comic line about keeping “your government hands off my Medicare,” and it reminded me of something I’d read earlier in the day:

Jacksonians care as passionately about the Second Amendment as Jeffersonians do about the First. They are suspicious of federal power, skeptical about do-gooding at home and abroad; they oppose federal taxes but favor benefits such as Social Security and Medicare that they regard as earned. Jacksonians are anti-elitist; they believe that the political and moral instincts of ordinary people are usually wiser than those of the experts and that, as Mr. Mead wrote, “while problems are complicated, solutions are simple.” 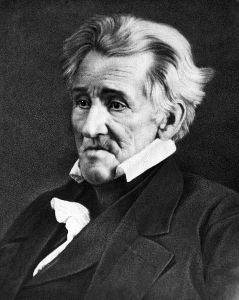 That is why the Jacksonian hero defies the experts and entrenched elites and “dares to say what the people feel” without caring in the least what the liberal media will say about him. (Think Ted Cruz. )

The tea party is Jacksonian America, aroused, angry and above all fearful…

That piece goes a long way toward explaining — at least to me — why I’ve had a problem with the Tea Party since it first emerged. I have always — or ever since I studied American history in college, which is kinda like always — had a problem with the Jacksonian mindset. I’ve always thought of the day he defeated John Quincy Adams as one of the darkest days in the leadership of this country.

I’m not a Jeffersonian, either. I’m more of an admirer of John Quincy’s Dad.

Anyway… I don’t think I had heard the tea partisans referred to as Jacksonians before. But now that I have, it seems a fairly neat, coherent way of describing their political pedigree.

33 thoughts on “The Tea Party as Jacksonians”