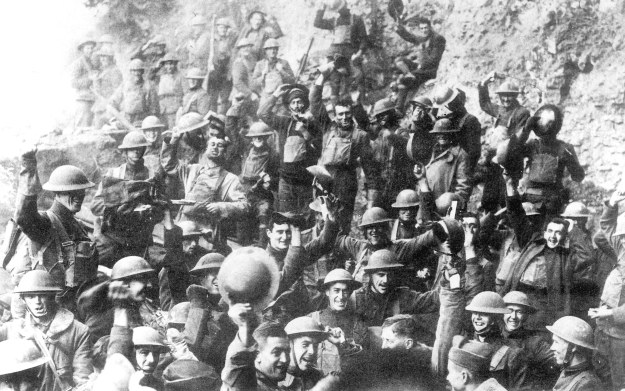 Doughboys of the 64th Regiment celebrate the news of the Armistice, November 11, 1918

I originally posted the below material as a comment on the “Top Ten War Movies” post from over the weekend. Bryan suggested that today, it should be a separate post. I suppose he’s right.

The context is that I was responding to two previous comments — one by Rose praising the TV series “Band of Brothers,” and the other from Phillip about “anti-war” messages. This lies in the larger context of a long debate of several years’ standing, in which Phillip takes the position that all sane people oppose war, and I take the armchair-warrior position of “not always”…

“Band of Brothers” was the best thing ever made for television.

And it had the kind of anti-war message in it that I appreciate [as opposed to the kind of anti-war message I hate, which I had described earlier as “one that beats you about the head and shoulders with the idea that war is futile and stupid and anyone who decides to involve a nation in war is evil and unjustified, and we should never, ever engage in it”]. It’s very similar to a powerful one in “Saving Private Ryan.”

There’s this great scene in which the actor portraying David Kenyon Webster — the writer, from Harvard — is riding past thousands of surrendering Germans being marched toward the rear (the opposite direction from which he and Easy Company are traveling) and he spots some senior German officers. He starts shouting at them (excuse the language):

Hey, you! That’s right, you stupid Kraut bastards! That’s right! Say hello to Ford, and General fuckin’ Motors! You stupid fascist pigs! Look at you! You have horses! What were you thinking? Dragging our asses half way around the world, interrupting our lives… For what, you ignorant, servile scum! What the fuck are we doing here?

To explain what I mean by this… I grew up with shows like “Combat,” which gave a sort of timeless sense of the war. Sgt. Saunders and his men were soldiers, had always been soldiers, and would always be soldiers. And they would always be making their way across France in a picaresque manner, doing what they were born to do.

Well, what Webster is shouting at those Germans is that NO, we were NOT born to do this. This is a huge interruption in the way life is supposed to be.

That lies at the core of Tom Hanks’ character in “Saving Private Ryan.” His men think HE was born to be a soldier, and can’t imagine him in any other role (as Reuben says, “Cap’n didn’t go to school, they assembled him at OCS outta spare body parts of dead GIs.”) — hence their intense curiosity about what he did before the war. And their stunned silence when they learn the reality:

I’m a schoolteacher. I teach English composition… in this little town called Adley, Pennsylvania. The last eleven years, I’ve been at Thomas Alva Edison High School. I was a coach of the baseball team in the springtime. Back home, I tell people what I do for a living and they think well, now that figures. But over here, it’s a big, a big mystery. So, I guess I’ve changed some. Sometimes I wonder if I’ve changed so much my wife is even going to recognize me, whenever it is that I get back to her. And how I’ll ever be able to tell her about days like today. Ah, Ryan. I don’t know anything about Ryan. I don’t care. The man means nothing to me. It’s just a name. But if… You know if going to Rumelle and finding him so that he can go home. If that earns me the right to get back to my wife, then that’s my mission.

There, you learn this this is NOT supposed to be where he is. This was not the way his life was supposed to go.

Now… on the other hand…

Dick Winters was a real-life guy who had no desire to be a warrior. After surviving D-Day (having led his men in an action that should have gotten him the Medal of Honor, but he “only” received a Distinguished Service Cross for it), he took a quiet moment to pray that “I would make it through D plus 1. I also promised that if some way I could get home again, I would find a nice peaceful town and spend the rest of my life in peace.”

That’s all he wanted.

And yet, by having been forced to be a soldier, he and everyone around him found that he was superbly suited to it. He was one of those rare men who thought quickly and clearly under fire, and communicated his calm and his self-assuredness to his men. He knew what to do, and how to give orders so that it got done. He had a gift.

And that gift actually was a thing of value — to his society, and to the world. And here’s where we separate. Here’s where we draw a line between being “anti-war” as an absolutist position — that war is always wrong and evil and has no redeeming qualities — and my position, which is that sometimes nations need people like Dick Winters to step forward and exercise those abilities that they have. In other words, the warrior is a valuable member of society like the butcher, the baker and the candlestick-maker (actually, nowadays, perhaps more valuable than the candlestick-maker).

Which seems like a good place to stop, a little more than an hour before 11 o’clock on Nov. 11.

20 thoughts on “An Armistice Day reflection”