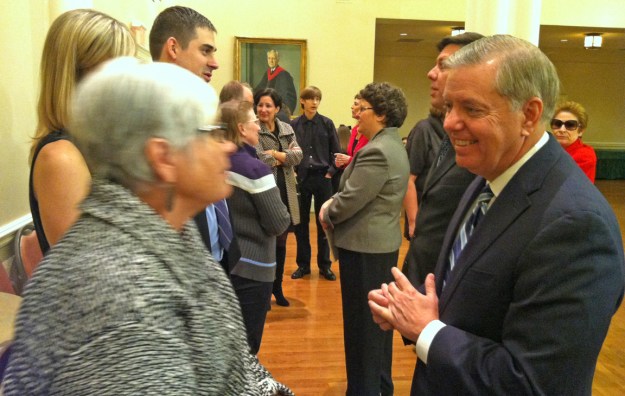 This morning, the national buzz is all about Chris Christie having positioned himself so well for the presidency in 2016. The talk is so far along that I couldn’t resist joking:

But the very qualities that make Christie attractive as a general-election candidate (Republicans are fairly swooning over his getting 51 percent of the Latino vote) get him in trouble with the national GOP base. Most of it is silly, symbolic stuff, such as his making nice with President Obama (you know, the guy who was rushing billions in aid toward his state) after the hurricane. But you know how the base (in each of the parties) can be about the silly, symbolic stuff.

In fact, the reservations harbored by many of the people who, had they been in Virginia, would have voted for Ken Cuccinelli are such that I find myself wondering about this:

Sen. Lindsey Graham’s (R-SC) re-election bid will evidently get a lift from one of the most popular governors in the country and a top 2016 contender….

According to the Times, Christie informed Republicans in South Carolina he intends to go to bat for Graham, who is facing a GOP primary next year.

Yeahhh… that’s the thing. The GOP voters who are mad at Graham are likely to be the ones least charmed by Christie.

So, I ask — is Christie coming here a plus or a minus for Graham? Thoughts?

11 thoughts on “Hmm… Does Graham WANT Christie to campaign for him?”