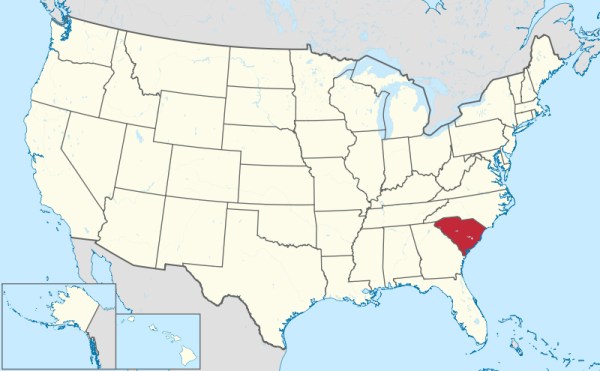 Easily the most beautifully shaped of all the states.

End of last week, Bryan Caskey shared with me this link to an MSNBC host (apparently, his name is Touré — no last name) seeming to suggest that some red-state U.S. senators were voting more conservatively because they live and govern “in a gerrymandered world.”

Which seemed to suggest that this guy thought that, you know, states were gerrymandered.

This caused Bryan to riff, “Yup. I’m OK with redrawing some state lines, though. Who knows, it might be fun.”

To which I responded, “Not SC, though. It has the most aesthetically pleasing shape of all the states.”

Which it does. Ever since I was a little kid, I’ve grooved on SC’s beautiful, kinda-but-not-exactly-regular triangle shape. (There were several irregularly-shaped paving tiles outside my grandparents’ back door, and one of them looked just like SC, which to me had some sort of cosmic significance.) If it were a perfect, equilateral triangle, it would be less beautiful. It’s more of a naturalistic triangle. I like the cockeyed top, which makes it seem to be wearing a hat rakishly tilted to the side.

And then it occurred to me — if all districts (as opposed to states) had to be drawn to look more or less like South Carolina, gerrymandering would be dead. A district that looked like SC in shape terms would also look like real communities in a demographic sense, rather than having these super-white and super-black districts side-by-side.

And there would be relatively few “safe” Democratic and Republican districts. Which means elected representatives on the federal, state and local levels would have to reach out to voters across the political spectrum. Gridlock would end, and sensible, pragmatic legislation would be a commonplace.

And we’d all live in a better country.

15 thoughts on “How to cure gerrymandering: Draw all districts to look like South Carolina”