At the risk of seeming even more like a guy who thinks of himself as the Editorial Page Editor in Exile, allow me to call your attention to a second good piece on the opinion pages of The State today.

You should read Rep. Nathan Ballentine’s piece promoting Richland County Sheriff Leon Lott as the guy who can lead Columbia to solutions in dealing with its violent crime problem. An excerpt:

The answer to Columbia’s violent crime isn’t what, but who

Recently, the Midlands has seen a dramatic rise in gang violence and senseless shootings. Business leaders, elected officials, USC’s administration and many others have sought answers to the big question: What can we do to stop it? College students, victims’ groups and law enforcement officials all have met and pondered the same question: How can we combat violent crime? 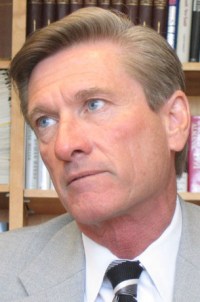 There may not be just one answer, but I know one man who has the experience and sheer determination to find all the answers and get the job done here in Columbia: Richland County Sheriff Leon Lott.

In the past, Columbia City Council has been reluctant to cede power to Sheriff Lott, apparently because of small turf battles and out of fear that council members might lose some control over the law enforcement they currently manage….

For many of us, the answer is clear: have Sheriff Lott take over control of city law enforcement efforts and allocate resources where he knows they will best be utilized, city or county. To do anything less is simply sanctioning further violence throughout Columbia.

Some may be surprised to see a conservative Republican lawmaker — one of Gov. Nikki Haley’s oldest and best friends in the House — praising a Democratic sheriff to the skies. Such people don’t know Nathan Ballentine very well. He will work with anyone, D or R, whom he sees as able to get the job done.

Others, unfortunately, will dismiss this as a white legislator (a Republican, no less — and from Chapin!) promoting a white lawman to ride in and show a town with a black mayor, black city manager and a series of minority police chiefs how to make Five Points safe for white college kids. Not that anyone will put it quite that bluntly, but there may be such a reaction, on the part of some, to that effect.

People who react that way will not be reassured by Nathan pointing out that Sheriff Lott was way out ahead of the city in recognizing the community’s gang problem, and doing something about it. That has long been a touchy subject along the demographic fault line in Columbia, with (and yes, I’m deliberately oversimplifying to make a point) white folks saying of course there’s a gang problem, and black folks saying, you white people see a “gang” wherever two or more young, black males congregate.

Setting race aside, some will react at the “great man theory” that underlies the Ballentine piece — the idea that this sheriff, this man, is the one to do the job. What happens, they’ll say, when Lott is no longer sheriff?

In other words, the barrier to communication runs a little deeper than “small turf battles.” Although that’s a part of it, too. There are multiple reasons why this hasn’t happened already.

There’s an opportunity here. Mayor Steve Benjamin has just gotten re-elected by a strong margin, and he has floated the idea of Lott taking over before. With the strong-mayor vote coming up the potential for change is in the air — although it’s tough to say whether the Lott idea has a better or a worse chance in light of that. (Better if it makes people more willing to give the major more power, worse if they say, if a strong mayor doesn’t run the police department, what’s the point?)

If he takes this up again, Benjamin has the political chops and stature to override a lot (if not all) of the gut-level objections out there, as well as the bureaucratic ones.