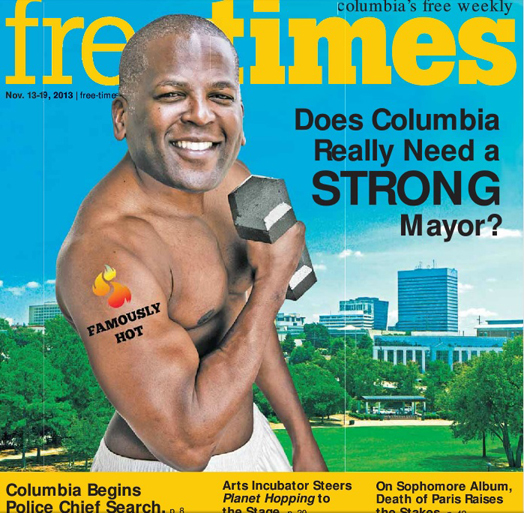 Last night at the annual meeting of the City Center Partnership in the Tapp’s Arts Center, Columbia’s just-re-elected mayor got up to speak, and urged those present to address him henceforth as Steve “Landslide” Benjamin.

Yes, it was a joke. Everybody laughed. (Although when it was mentioned at another meeting I attended today over lunch, mayoral aide Sam Johnson said yeah, he was trying to discourage “Landslide” from calling himself that. Also joking. I think.)

Over at ADCO, we were particularly pleased to see the above cover on last week’s Free Times. On account of, you know, we came up with “Famously Hot.” I really enjoy the fun that Free Times has with the brand, such as on this cover last year.

11 thoughts on “Re-elected Mayor Benjamin pumped up, feeling his oats”