The State‘s new Buzz blog (I’m trying to remember whether this is the paper’s first serious attempt at a state and national political blog since I got laid off, but perhaps such reflections are ignoble of me) brought my attention to the above clip. Their account (like I’m gonna retype if it I don’t have to) of it:

U.S. Sen. Tim Scott passed twice on saying whether he would endorse his fellow S.C. senator, Republican Lindsey Graham, in an interview on CNN’s Crossfire Wednesday.

When CNN’s Van Jones asked Scott whether he would support Graham, Scott said, “You know, as you three have heard recently, I am up for re — up for reelection myself. I’m going to make sure that Tim Scott gets out…I’m going to allow for all the other folks on the ballot to represent themselves very well, and I’m going to continue to work hard for my re-election.”

I sort of doubt that Sen. Graham’s going to be sitting up nights trying to think of favors he can do for Sen. Scott in the foreseeable future.

I was particularly struck by the way he stopped himself from saying “re-election,” then went ahead and said it anyway. The question seems to have had him pretty flustered… 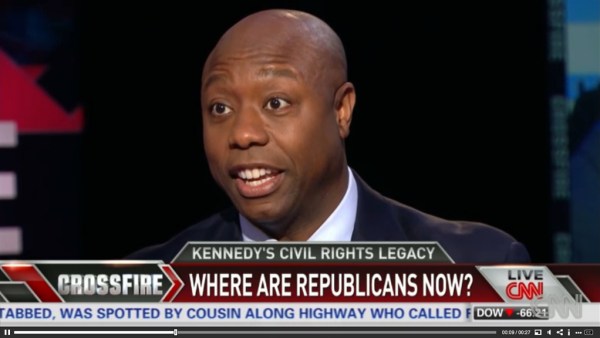