Jim Hesson was possibly my best friend on senior staff at The State, except for Warren Bolton. He was the paper’s IT director. Actually, we called it “I.S.,” for “information services,” and Jim lived that. He was helpful, patient, competent, and had a great sense of humor. 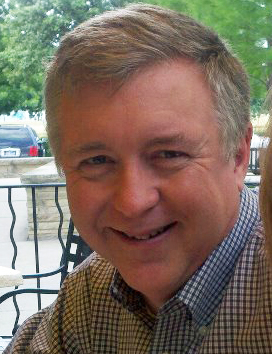 I still remember with embarrassment the time we were all riding up to North Carolina in a van for a senior staff retreat. He and I talked and joked back and forth so constantly that the person sitting between us finally offered to move, so that we would stop talking across her. Which made me feel bad that we’d been so rude. But I always had a good time talking with Jim.

The purpose of that trip, by the way, wasn’t to talk business. It was to go whitewater rafting. Holly Rogers, the life-loving soul who was then our human resources director, had this idea that to work together effectively, people should sometimes have fun together (another year, she dragged us all out to Frankie’s Fun Park). I would grumble and complain and pass critical remarks about these outings, and fret about the work waiting for me, but once there, I would throw myself into it and have as much fun as anybody. Those were different times.

Back to Jim Hesson. Today, Jim posted this on Facebook:

Yesterday morning I was having my quiet time on the train heading in to work. I was praying that God would give me clarity about my job and if it was time to seek another position. After I got in I was called in to a meeting where I was told my position was eliminated , along with a number of others in our IT dept. So God did answer my prayer, just not in the way I expected. God is good. And I know He can be trusted in all things.

I am so sorry, Jim. But I believe your faith is well-placed. You got an answer; it’s just not going to be an easy one to accept. May you soon see clearly the next steps on the path before. That’s the hard part — wondering whether that next opportunity will ever come. The good news is that you’ve got the right attitude about it.

I am deeply impressed by Jim’s honesty in sharing this. I wasn’t like that. Oh, I shared a lot — far, far more than most people who are laid off do. Thousands upon thousands of words, in my last columns and on the blog. On the first day I didn’t have a job to go to, I stood up in front of the Columbia Rotary Club and cracked jokes about it. And I didn’t lie about anything.

But it was superficial, stiff-upper-lip stuff. It was never gut-level. Not that I meant to mislead; I was just so busy figuring out the next step of each day that I didn’t plumb the depths of what I felt. In truth, of course, I wasn’t feeling on a deep level. I wouldn’t fully realize at the time how much I was losing. The grief of losing the job that paid me well to do what I do best is something that has unfolded itself gradually over a period of years. At the time, the bad feelings were offset by relief that I would no longer be the one laying off, and then having to figure out how to do the job going forward, without those good people. I quickly got over the rush of anger that I felt in the moment I got the news. I refused to dwell, even in my own mind, on how it felt to tell my wife and family.

And I certainly didn’t share private communications between me and the Almighty. In any case, they would have seemed rather incoherent and repetitive, not elegant and direct like what Jim shared.

It occurred to me to keep a journal, maybe write a book, about what it was like to have reached the pinnacle of what you wanted to do for a living, and then have it all taken away in an instant, just as you’re stepping into your peak earning years. And about what happens next. It would have relevance, in that year of 2009. (And today as well. How many people out there have never regained what they had? The unemployment figures don’t tell you that.) But I thought, what a bummer that would be — I certainly wouldn’t want to read such a book, much less write one.

Now, if I wanted to go back and write something like that, I’d have trouble assembling the details. I’ve just forgotten so much of it.

In any case, what could I write that would be as powerful as what Jim did?