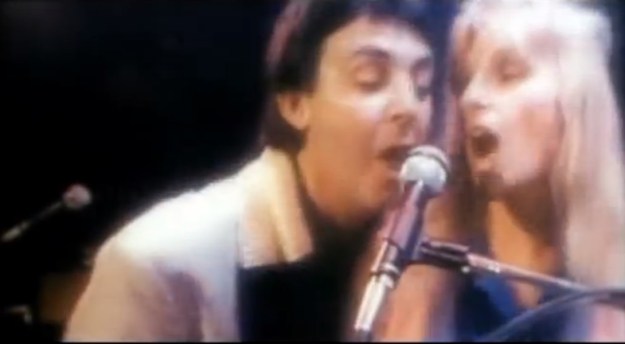 Paul and Linda, “simply… having… yadda-yadda…”

And now that my temper is up, I may as well go on and abuse every body I can think of.
— Mark Twain, The Innocents Abroad

Is that headline a contradiction in terms? Should it be, “Bottom Five?” Or would saying that, with “Worst” — which I feel compelled to use — be redundant?

But before I get to my list, allow me to complain that we are not in the Christmas season. This is Advent. Even though I was sick at home with a cold the first Sunday, and late the second Sunday, and therefore missed the candle-lighting ritual at Mass both times, I know this is Advent. You know how? I can read a calendar. Christmas starts on the 25th (remember how we used to call it Saturnalia, o fratres mei?), and ends on the Feast of the Epiphany. 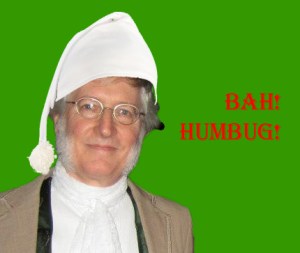 Silence kindly created this image of me as Scrooge to go with this post.

Oh, you say only the Church calls it that? Well, let me clue you in: The Church invented Christmas. In fact, Protestants refused to celebrate it for generations because it was seen as so Catholic. Even Santa Claus is a saint. So there.

Speaking of which, one category of song you won’t see represented here is the kind that isn’t really a Christmas song at all; it’s really a winter song. Take “Jingle Bells,” please. (OK, I don’t really hate “Jingle Bells;” constant repetitions of it when I was a small child conditioned me to associate it with festivity. It’s just an illustration of my point, so bear with me.) Does it say anything about Christmas? No, it doesn’t. OK, there’s the sleigh — but it’s not, specifically, Santa’s. It’s a run-of-the-mill sleigh. It’s drawn by one horse, not by reindeer.

Or, worse yet, “Frosty the Snowman.” Is there a single Christmas allusion in it, direct or indirect? No, there is not. It’s about winter. Ditto with “Let it Snow,” which was thrust upon me one morning this past week.

Moreover, it’s about winter as we in South Carolina seldom experience it. Oh, sometimes we get a dusting of snow — in February. I, having spent most my life in the South (or in the tropics), have never experienced a white Dec. 25th. Granted, we had a nice blanket of the stuff fall on the second or third day of Christmas in 2010, but that’s an exception that proves the rule.

Songs like that are about winter in a particular part of the world, which is not here. So where’s the relevance?

Mind you, it’s not that songs must contain Jesus, Mary and Joseph, much less the Three Kings (who in any case should not be heard from before Jan. 6) in order to make the category. I’m happy with Santa, or the elves, or the reindeer, or a Yule log, or a tree… something, anything, that relates it to the actual holiday.