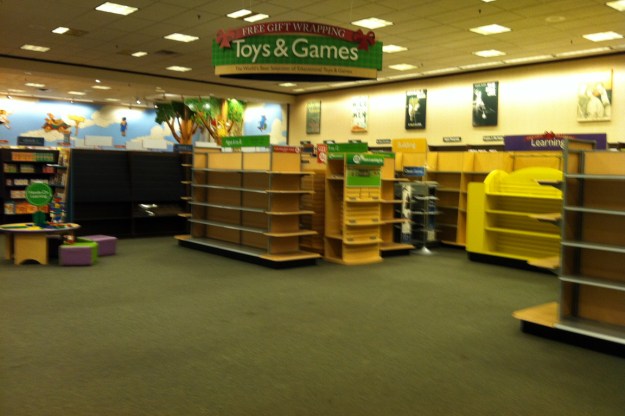 The purists who didn’t like the floor space that Toys & Games took over in recent years may be gratified to see that area as one of the first cleared out.

Here we are in the very last days of my very favorite store on Earth, the Barnes & Noble on Harbison.

Its last day of operation is Tuesday… Dec. 31.

The Harbison B&N is more than a store to me. Or perhaps I should say, something other than a store. I certainly made far more purchases at other stores over the years — Food Lion, Publix, Walmart and the like.

But for me, this store was the ultimate “third place.” That’s a term I knew nothing about until recently, when I was getting ready to help conduct a brand workshop for an ADCO client, and I happened to read up on the branding strategy of Starbucks, which has from the start striven to be a “place for conversation and a sense of community. A third place between work and home.”

I enjoy both of those places, but between the two, I prefer B&N. There’s only so much you can do in a Starbucks. Noise is often a factor in the coffee shops, while B&N had a more library-like feel to it, except right around the cafe portion, where the sound of the grinder could be intrusive. And then there are all the books to browse through, which to me has always been a sort of foretaste of heaven.

I loved browsing in B&N even before I started drinking coffee in 2004. (Long story behind that. From the time I turned 30 until my 50th year, caffeine drove me nuts. Then, when I was at the Republican National Convention in New York in 2004, I started drinking coffee to deal with the 20-hour days — there was, after all, a Starbucks on every corner. And I found that it didn’t bother me anymore. In fact, it did what it was supposed to do, keeping me from dozing off and creating a nice, creative buzz.)

But to browse through those books for a couple of hours on a Saturday, enjoying my first (and second) coffees of the day — that was awesome. And if I took along my laptop and did a little blogging while I was there, well, all the better.

And yes, I did occasionally buy something. In fact, I buy most gifts there. I find it easier to imagine what sort of book someone will like than any other sort of gift, and I make a point of buying them at the actual store to show my appreciation for all the good times it affords me. Buying the gift also makes me feel less of a self-indulgent sensualist as I browse.

Anyway, I was there a couple of times over the last week or so before Christmas. The first time, I bought a book for my Dad — a biography of Omar Bradley. When I got to the counter to pay for it, the clerk asked whether I was a member. I said yes, and offered my card. It had expired (yeah, I think it was around the holidays when I renewed last year). She asked whether I wanted to renew. No, I said sadly, thinking, What would be the point?

The second time, on Christmas Eve, I found myself in Harbison with a little time on my hands, and just went in to browse once more. For nostalgia’s sake, I even put sugar in my coffee, even though I’ve been drinking it black for years. I used to use a lot of sugar back in the day, such as when I wrote this.

I was wandering through the DVD section, seeing if there were any last-minute gifts that would strike me, when one of the booksellers asked whether I needed help. I said no, but as he turned away, I asked him to wait.

I asked when the store would close. He told me — New Year’s Eve.

I asked why it was closing. He said because B&N couldn’t afford the lease, and the new tenant, Nordstrom, could.

Apologizing for intruding, I asked what he, who had worked at B&N quite a few years, was going to do. He said he might be working at the store at Richland Fashion Mall, and he urged me to come there. I said yeah, that store was OK, but it had no audio/video section. He noted pragmatically that that was the first part of the store he would expect to close, since everyone downloads music now and streams movies online.

But, feeling like an advocate trying to save a client’s life in a hopeless trial, I argued that Netflix didn’t have the high-quality, hard-to-find movies that you could buy at B&N, such as the Criterion collection of fine films. He pointed out there were other places you could get those, although no local, bricks-and-mortar location had as large a Criterion selection as B&N did.

I got a B&N gift card for Christmas, so I’ll probably be in their one more time before it closes for good. Maybe I’ll see you there. Maybe we can have a coffee together, with several sugars to counteract the bitterness…

12 thoughts on “Saying goodbye to my very favorite store, Barnes & Noble on Harbison”