As you may know already, Inez Tenenbaum is returning home after several years running the Consumer Products Safety Commission. The NYT did this piece on her legacy at the agency:

By the end of her four-year term, which came to a close on Friday, she can say that she has presided over a significant increase of the agency’s powers. And Ms. Tenenbaum, 62, has not been shy about using them. The agency recently leveled its highest fine ever — $3.9 million — against Ross, the discount retailer, because it continued to sell what the commission said was defective children’s clothing, even after warnings from the agency. 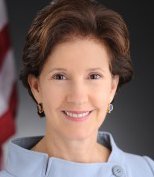 She and the safety commission also waded into one of the most contentious topics in the sports world: protecting football players from head injuries. The result was the Youth Football Brain Safety initiative, which called for the replacement of youth league helmets with safer models paid for by the National Football League, the National Collegiate Athletic Association and the N.F.L. Players Association….

For the Youth Football Brain Safety initiative, the N.C.A.A., the N.F.L. and the players association kicked in a total of $1 million to pay for the helmet replacements. “The support of Chairman Tenenbaum and the C.P.S.C. played an important role in making our helmet replacement initiative a reality,” Roger Goodell, the N.F.L. commissioner, said in a statement. “We really appreciated her personal involvement and the agency’s in the work to make our game better and safer.”

Yet the commission under Ms. Tenenbaum’s leadership has not been exempt from criticism. Some of the biggest complaints followed the decision by agency lawyers to hold Craig Zucker, the chief executive of the company that made Buckyballs, liable for the recall of the magnetic children’s toy, even after the company was dissolved. Manufacturers have argued that holding an individual responsible for a widespread, and expensive, recall sets a disturbing example, and would discourage companies from being open in their dealings with regulatory bodies.

Ms. Tenenbaum said she could not comment on the case because it was continuing…

And here’s a link to John Monk’s story about her tenure in The State today.