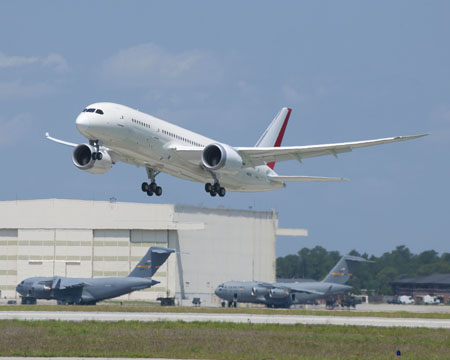 We take great pride in our Boeing 787 plant down in North Charleston, and with good reason. It shows, as Bobby Hitt would say, that “we know how to make stuff” in South Carolina, including high-tech stuff.

So it is that I worry that it seems to be more and more routine for national media to say this one negative thing about the SC Boeing plant, as I have boldfaced in this passage from a story in The Wall Street Journal this morning:

Never overwhelmingly credible was Boeing’s threat to rip away its new 777X from its unionized Seattle-area workforce if local union members didn’t approve contract concessions, as they did last week.

Let us count the reasons: Boeing was already known to be dissatisfied with the dispersed plane-making that currently has the 787’s wing made in Japan. Boeing’s own new 787 plant with nonunion workers in South Carolina has been slow to get up to speed. A trained and experienced workforce, such as exists in the Seattle area, is not easy to recreate and Boeing is under considerable pressure from customers signing up for deliveries of the new 777X after 2020 to minimize delays and snafus like those that afflicted the 787….

Hey, I want them to take their time and do it right — I’d hate for SC workers to get the reputation of being casual and slipshod. But I hate seeing the word “slow” in connection with SC labor.

I’ve just seen that mentioned a number of times recently, to the point that it has started to worry me…