I just got around to this video from yesterday celebrating the Citizens United decision four years and one day ago.

Yes, I said, “celebrating.” As in, “Yippee!,” as opposed to what I usually hear about it, which is more in the Egon Spengler range, as in, “Try to imagine all life as you know it stopping instantaneously and every molecule in your body exploding at the speed of light.”

Here’s the release about it:

ALEXANDRIA, VA – Today the Center for Competitive Politics marked the fourth anniversary of the Citizens United v. Federal Election Commission ruling by releasing a video about the decision by noted YouTube artist GoRemy.

The video examines five common misconceptions about the Citizens United that many critics of the decision tend to gloss over, such as the government’s argument that they should be able to ban books and that the decision did not create the concept of corporate personhood.

What the Citizens United decision did do was overturn blatantly unconstitutional parts of a law designed to prevent freedom of association among individuals with the purpose of speaking out about politics. And, despite repeated assertions that the decision would lead to the corporate takeover of our democracy, we’ve had some of the most competitive elections in our nation’s history.

At its core, Citizens United was about whether the government could ban a nonprofit corporation from distributing a movie about a political candidate. The decision did not “reversed a century of law to open the floodgates – including foreign corporations – to spend without limit in our elections,” as President Obama famously chastised the Supreme Court. Rather, the decision allowed organizations to do what wealthy individuals have always been able to do: make independent expenditures advocating for or against a chosen candidate.

Now why am I posting this? Because I agree with it, or because I wish to rip into it? Neither. Basically, it attracted my attention because on the thumbnail for the video, I saw the very same mug shot of Nick Offerman in the role of Ron Swanson on “Parks and Recreation” that one of y’all — I want to say Silence Dogood — used to use as an avatar. So I thought at least one of y’all would enjoy it on that basis. Yes, I know that’s a thin premise, even though I cannot measure how thin it is.

I decided to go ahead and post it after seeing it, because I was intrigued by — whatever you think of the message — how slick it was.

Starting with the choice of pitchman, who I am told is “noted YouTube artist GoRemy.” OK, whatever. I’m just impressed by how well-chosen he was to make people think more kindly of the idea of corporations being people and such.

If you have an “Occupy Wall Street” picture in your head of the people who celebrate Citizens United, then you expect the spokesman to be somebody like Robert Stack, or Charlton Heston, or Peter Graves, or some other old, dead, establishment-looking white guy. (You may object that a dead guy couldn’t shoot a video, but we’re not talking about reality; we’re talking about the way Occupy Wall Street sees the world.)

This guy is like the opposite of that, only in a cool way, so you’re not beaten over the head with it.

According to Wikipedia, GoRemy is Remy Munasifi, “an Arab-American stand-up comedian,[1] parody musician and video artist who became an Internet celebrity after his production of comedic sketches based on Arabs under the name “GoRemy” on YouTube. His videos had gained over 78 million views as of late 2010.”

He’s hip, he’s young, he’s glib, he’s of nonspecific ethnicity, he’s nonthreatening, he’s not dead, and he most assuredly is not Robert Stack — not even the funny, ironic Robert Stack in “Airplane!”

Perhaps a little too glib. I have to say I was a bit offended at having the Plessy vs. Ferguson case dismissed with a funny picture of a baby with a perplexed expression and the caption, “WHO VS. WHATNOW?”

Or at least, I would have been, if it hadn’t all gone by so quickly that I had to back it up and freeze frames in order to see what the baby was supposedly saying.

The point of the video is to make your brain dance lightly along to the tune of the fun wordplay, and then wander away humming to itself and thinking, “That Citizens United isn’t so bad after all…” 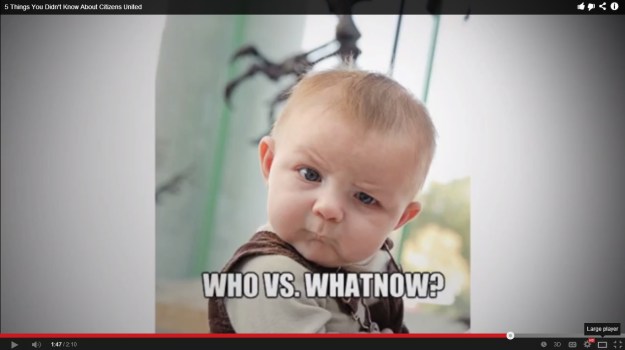