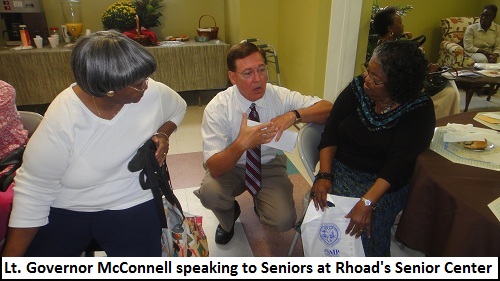 By all accounts, he has really thrown himself into the work of running the Office on Aging as lt. gov.

Wow, it’s kind of hard to imagine the State House without Glenn McConnell.

He was, for so many years, arguably (that being every journalist’s favorite hedge word) the most powerful person in state government, for good or ill.

He’s the guy who was the biggest defender of the Legislative State and barrier to reform, yet led a significant improvement in the way South Carolina chooses judges.

He was the champion of limited government and spending ceilings, yet managed to come up with all that dough for the Hunley.

He was, finally, the man who liked to dress up as an Old School Southern gentleman, who then acted like a real gentleman by giving up power for a point of honor (when he agreed to give up his position in the Senate to occupy the low-status job of lieutenant governor, rather than trying to engineer a way around the rules).

Now he’s giving up that job, for a shot at academe:

COLUMBIA — S.C. Lt. Gov. Glenn McConnell will not seek another term and instead push to become president at his alma mater, the College of Charleston.

McConnell has said he wanted to make a decision since the college’s presidential search timetable conflicts with the June primary. A new president to succeed George Benson will not be named until around March.

“Any effort to pursue both goals at the same time is simply not an honorable path,” McConnell said in statement Monday. “It would not be fair to good candidates who may want to seek this office. Most of all, it would not be fair to the voters of South Carolina to ask them to support me for lieutenant governor if there is even a chance I might not remain in the campaign. For those reasons, I have decided I will not be a candidate for re-election. And I will instead formally offer my name for consideration to the College of Charleston.”…

The State House is losing a true original…

28 thoughts on “McConnell to step down from elective office”