Nor did they have eggs, say I. Although I don’t know which they didn’t have first. 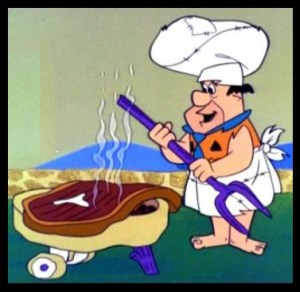 Hey, if it was good enough for Fred and Barney…

I have now sorta, kinda, in fits and starts, embarked on my first diet aimed (at least in part) at losing weight in my life.

I’ve always been on a rather restrictive diet, because of my allergies. And that diet has probably protected me from a lot of the ills that beset modern Americans. Thanks to my allergy to wheat (and, more severely, to dairy products and eggs), I can’t eat anything from a bakery, and that eliminates a lot of trouble right there.

It also cuts out most complex recipes, particular those involving some form of stuffing or sauce. Mostly, I eat very plain meat (except chicken), vegetables and fruit, with rice being my main starch, along with corn (grits) at breakfast.

And over the years, whatever health problems may arise, my basic vitals have been good — good pulse, low blood pressure, acceptable cholesterol levels, and so forth.

That is, a modified paleo diet. Indeed, more hardcore paleo diet, if I may say so without bragging. No eggs, because they would kill me. And frankly, I seriously doubt that eggs could have formed any significant part of cavemen’s diets. Sure, they’d find one now and then, but they couldn’t have relied on them every morning for breakfast. Anyway, even if I weren’t allergic, better off without eggs on account of my slightly elevated cholesterol levels (which my doctor is thus far unconcerned about).

And do you think they even had chickens as we know them? I don’t think so. So when folks at ADCO said they were going out for chicken soup for lunch today, I grunted self-righteously, “Cavemen didn’t have chicken.” (As the diet progresses, that will probably come out more like, “Caveman no have chicken.”) Some paleo “authorities” may disagree, but what do they know, really? They weren’t around back then.

So, as the holidays wound down, so did my menu. At home, I’m eating meat and vegetables. At the Cap City Club each morning, I’ve cut out the grits and/or oatmeal. Just meat (which this morning, delightfully, included salmon) and fruit. And coffee — unsweetened, of course, but I was already there.

And no beer. Unless I find myself in a social situation in which it would just be plain rude to turn one down. (This has happened once since I started on Wednesday. It could happen again any time without warning — I’m very polite.)

No great loss in girth yet. But then, I’m sort of easing into this as I continue to eat some stuff left from the holidays, such as this wonderful bread that my daughter made, just for me, that includes nothing I’m allergic too. I’ll probably run out of that tomorrow.

I share all this because it’s what I’m thinking about. And the only news so far today seems to be that Liz Cheney isn’t running for the U.S. Senate, and frankly, I didn’t care about it when she was running…

28 thoughts on “My personalized paleo diet: ‘Caveman no have chicken’”