Thought this headline on an email alert from The Washington Post kinda odd:

Hillary Clinton (has a) commanding lead over Democrats for 2016, poll finds 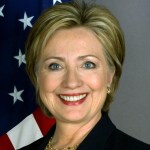 Well, yeah. Duh. I mean, since I can’t think of a single other Democrat being seriously spoken of as a 2016 candidate, one would assume she would have a “commanding lead.”

OK, yeah, Joe Biden. But we already knew she would swamp Joe Biden. I mean, I like Joe, but let’s be serious.

The race for the Republican nomination, in contrast, is wide open, with six prospective candidates registering 10 percent to 20 percent support….

What that means is that there is someone who has had a lead (if not a “commanding” one) over on the GOP side, too, but he’s in a lot of trouble.

And so, my little fantasy of having two acceptable people who were shoo-ins for their nominations, possibly avoiding the tears and flapdoodle of the sort of musical chairs game the Republicans played last time around, is to remain a fantasy. As, of course, I knew it would.

Democracy is so… messy…

4 thoughts on “Of COURSE she has a ‘commanding lead,’ when no one can think of another Democrat”