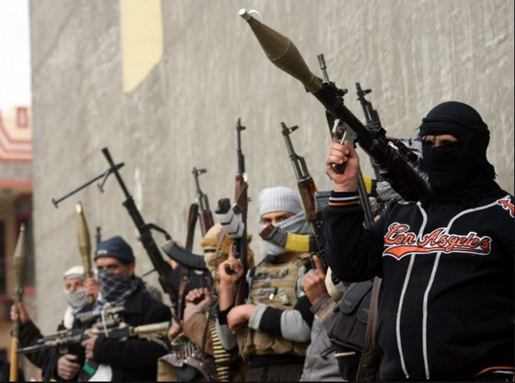 First, by way of appeasing the Fair Use gods, allow me to point out that the above is merely a low-res screengrab of a far superior image over at The Washington Post (by Mohammed Jalil of european pressphoto agency) and that I urge you sincerely to follow the link and see the wonderful gallery of images of which it forms a mere part, and to enjoy lots of other great content at the WashPost, in fact to subscribe, and to give all your custom to that great newspaper’s advertisers.

And I’m using it in order to make an editorial point. A silly one, but a point nonetheless. Hence Fair Use, right?

This morning, in my continuing quest to send new readers to the Post, I Tweeted about this story, which on the main page of the Post‘s iPad app was headlined, “Iraq turmoil stirs fears of civil war.” My observation was that it “Looks like they’ve already got one.”

Robert Ariail followed the link, and noticed something I had missed: “Check out the RPG-toting dude wearing a ‘Lon Asgeles’ sweat shirt.”

Ow. I found myself wondering how much he shelled out for that jacket (which he’s managed to keep pretty clean given that he’s engaged in, or preparing to engage in, ground combat), and marveling at what a maelstrom of conflicting emotions must surge in that man’s breast. The jacket seems to speak, however imperfectly, to aspirations to embrace Western culture. Yet he’s fighting with the jihadists. What’s his back story? Was he so ticked off that somebody sold him a defective knockoff that it turned him into a terrorist? Or at least to take up arms, since the cutline on this photo doesn’t specify which faction he’s with?

Probably not, but one wonders…

One thought on “OK, guys: No more selling cheap knockoffs in the Sunni Triangle, OK?”