Coming from the source it comes from, this is pretty devastating:

In a new memoir, former defense secretary Robert Gates unleashes harsh judgments about President Obama’s leadership and his commitment to the Afghanistan war, writing that by early 2010 he had concluded the president “doesn’t believe in his own strategy, and doesn’t consider the war to be his. For him, it’s all about getting out.” 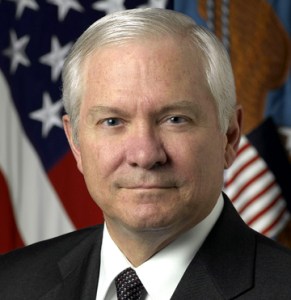 Leveling one of the more serious charges that a defense secretary could make against a commander in chief sending forces into combat, Gates asserts that Obama had more than doubts about the course he had charted in Afghanistan. The president was “skeptical if not outright convinced it would fail,” Gates writes in “Duty: Memoirs of a Secretary at War.”…

The source is someone for whom I’ve always had the utmost respect, as I’ve written in the past. Other political appointees come and go, but Gates has always seemed to me the real-life version of what the fictional George Smiley was in John le Carre’s world:

Mr. Gates is a Smileyesque professional. He was the only Director of Central Intelligence ever to have come up through the ranks. He had spent two decades in the Agency, from 1969 through 1989, with a several-year hiatus at the National Security Council. He received the National Security Medal, the Presidential Citizens Medal, the National Intelligence Distinguished Service Medal (twice) and the Distinguished Intelligence Medal (three times).
I trust professionals, particularly those who have devoted themselves to national service. Not in every case, of course — there are idiots and scoundrels in every walk of life — but if all other things are equal, give me the pro from Dover over someone’s golf buddy every time…

You know the real-life “golf-buddies” and campaign contributors and hangers-on. The fictional counterparts to them, in the le Carre world, would be Saul Enderby and, to a lesser degree, Oliver Lacon.

It’s one thing for Republicans and other professional detractors to attack the president’s national security seriousness. For Robert Gates to do it is quite another thing.