Congrats to my long-ago colleague Brigid Schulte, who just received a starred review in Publishers Weekly for her new book, Overwhelmed: Work, Love, and Play When No One Has the Time: 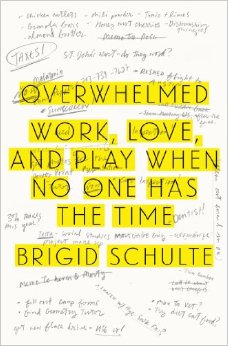 On her quest to turn her “time confetti” into “time serenity,” journalist Schulte finds that, while it’s worse for women and hits working mothers the hardest, what she calls the “Overwhelm” cuts across gender, income, and nationality to contaminate time, shrink brains, impair productivity, and reduce happiness. Investigating the “great speed-up” of modern life, Schulte surveys the “time cages” of the American workplace, the “stalled gender revolution” in the home, and the documented necessity for play, and discovers that the “aimless whirl” of American life runs on a conspiracy of “invisible forces”: outdated notions of the Ideal Worker; the cult of motherhood; antiquated national family policies; and the “high status of busyness.” The result is our communal “time sickness.” Schulte takes a purely practical and secular approach to a question that philosophers and spiritual teachers have debated for centuries—how to find meaningful work, connection, and joy—but her research is thorough and her conclusions fascinating, her personal narrative is charmingly honest, and the stakes are high: the “good life” pays off in “sustainable living, healthy populations, happy families, good business, [and] sound economies.” While the final insights stretch thin, Schulte unearths the attitudes and “powerful cultural expectations” responsible for our hectic lives, documents European alternatives to the work/family balance, and handily summarizes her solutions in an appendix. Agent: Gail Ross, Ross Yoon Agency. (Mar.) 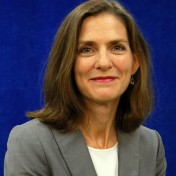 Brigid was the reporter I hired as Lee Bandy’s successor in The State‘s Washington Bureau. My memories of her sort of illustrate the theme of her book. First, there’s the way we met. I went to Washington in January 1993 — there was snow on the ground of the Mall around the booths set up for the first Clinton inauguration, which was to occur a few days later. I had set up interviews with a number of candidates, using an empty office in the Knight Ridder Washington Bureau as my base. But Brigid was out of town, and wasn’t getting back until almost exactly the moment my returning flight left.

So we met in the airport, as she was coming and I was going. I was sufficiently impressed to bring her down to Columbia for further interviews. We ended up hiring her. About a year later, she got drafted by the KR national staff, and not long after that moved on to The Washington Post.

Another quick anecdote: She was covering the round of BRAC hearings that led to the closing of Myrtle Beach Air Force Base. The climax of the process occurred on a Sunday afternoon. I happened to have the desk duty that day, and Brigid was having to wait for it all to happen, then write the story and somehow catch a train on which she was to depart with her then-new husband on vacation. This was before cellphones. She filed the story (on a Radio Shack TRS-80, I guess) at a time when it seemed physically impossible for her still to catch the train. Of course, I wasn’t going to let her go until I had the story.

Of course, life has become even more hectic since that time. I mean, she didn’t even have kids back then.

So, I have to wonder: How did she find time to write a book? I always wonder that — I marvel that anyone finds time in a lifetime to do that — but I particularly wonder, given that she knows so well how insane modern life is. Well enough to write a book about it.

But she was always well-organized. She used to carry two notebooks — one for the live stories that day, another for enterprise stuff she was working on for later. I suppose that, while working on this book, she carried a third. Or the electronic equivalent of a third…

6 thoughts on “So, how did Brigid Schulte find the time to write a BOOK?”