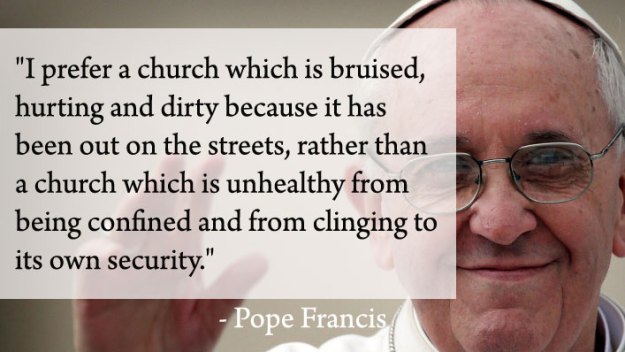 Sometime over the last few days, someone shared the above quote on Facebook, which caused me to have three thoughts:

And then I moved on.

But I ran across it again later, and had another thought:

Yes, other popes would have agreed with it, but Pope Francis chooses, unbidden, to assert this over and over. This is his chosen message. This is what he wants you to hear, and understand, about the Church and about Christianity.

And that’s what makes him special. It’s why the world welcomes him so joyfully. It’s why the guy can’t even leave an ordinary voice message for some nuns without it going viral. People love the guy. And that’s because the message he chooses, first and foremost, is that of love…

2 thoughts on “The thing that makes Pope Francis special”