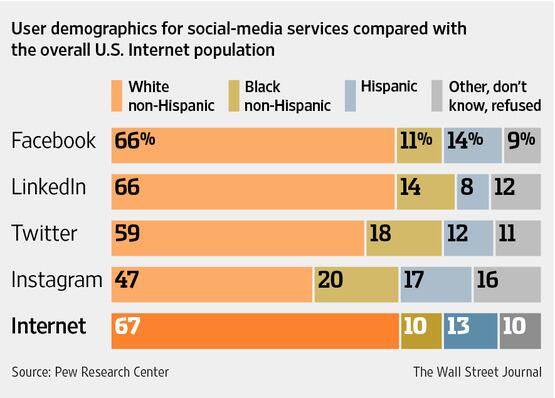 This, from the WSJ, sort of surprised me:

For most of its rather short life, Twitter rarely mentioned that its user base is more racially diverse than U.S. Internet users as a whole. Now, as a newly minted public company needing to generate revenue, it is moving to capitalize on its demographics.

Together, those groups account for 41% of Twitter’s 54 million U.S. users, compared with 34% of the users of rival Facebook and 33% of all U.S. Internet users, according to Pew Research Center’s Internet and American Life Project….

I don’t know why. Maybe it’s racist of me to have assumed that Twitter was way white. I think it probably had something to do with it being a geeky medium, and I think of geeks as white, the fictional Rajesh Koothrappali notwithstanding.

Facebook, as it turns out, is every bit as white bread as I thought it was. Twitter, less so.

These are not vast differences, but it seems meaningful that the Twitterverse is 50 percent blacker than the U.S. population as a whole. I don’t know what it means, but it seems it means something.

Lest you throw stones at me for being taken by surprise, I’ll have you know that many of my friends/followers/contacts are non-white. Although…

And I’ve sort of wondered about this…

I find myself associating more with nonwhite friends and acquaintances in real life than in the Twitterverse, or elsewhere on the Web. Look at my church (especially the Mass I attend, which is in Spanish), or the membership of the Capital City Club, etc.

In fact, and I hope I’m not insulting anyone here, I kinda think of most of y’all as white. Based on the regulars I actually have met — Kathryn, Doug, Silence, Bryan, Karen, Phillip, Bud, Mark, KP, etc. — that seems overwhelmingly the case. Of course, that’s totally anecdotal, but I tend to pick up on a pretty white vibe in most of our conversations.

This blog seems to lack crossover appeal. Unlike Twitter. I knew Twitter was cool, but I didn’t realize it could be quantified to this extent….

27 thoughts on “Twitter more racially diverse than rest of Web (and, I’m guessing, way more so than this blog)”