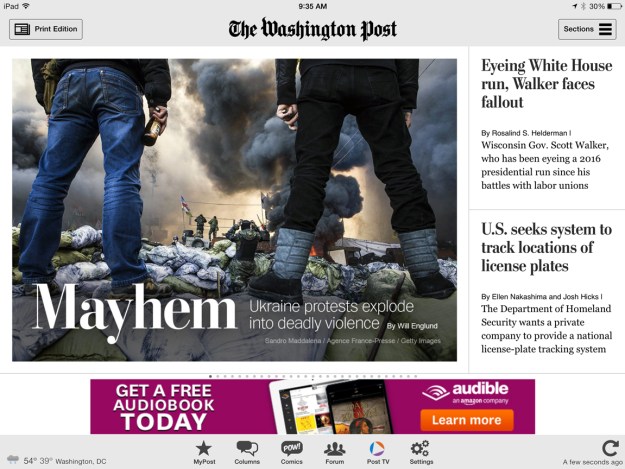 I’m really struck by the photos I’ve seen today of the violence erupting from the protests in the Ukraine.

The pictures have a dreamlike, end-of-the-world quality. But when I say “dreamlike,” I don’t mean hazy or gauzy or indistinct. They are on the contrary hyper-real. They don’t look like photographs. They look like acrylic paintings made to look like photographs, in which the color saturation and intensity of the images exceed real life. Look at the blue, and the folds, in the jeans worn by the figure on the left. There’s a quality there that must be much like the way colors and folds look while under the influence of hallucinogens.

It must be something about the quality of the light filtering through the smoke from the fires; I don’t know.

The one in which this effect is most pronounced is this one, which both The Washington Post and The New York Times used prominently this morning.

Then there’s this one, which is harder to take, showing two shocked faces staring out of masks of blood. This one has a kick to it like a Hieronymus Bosch.

I’m being careful here to point y’all to these images at publications that paid for them. I wouldn’t dream of violating the copyrights. The photogs who shot these deserve to be paid in full.

I urge you to view the entire slideshow at the NYT. And this one at the WashPost.