Had to smile when I noticed that Cindi Scoppe had posted something in Twitter seconds before I did this morning, so that we had back-to-back Tweets: 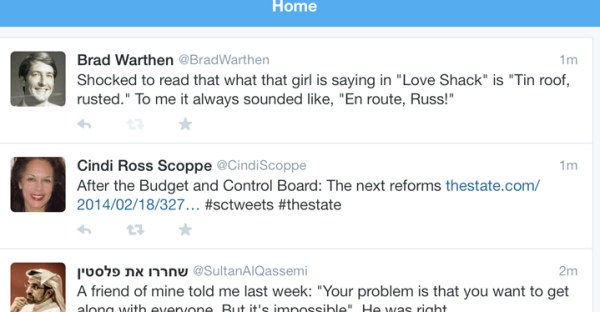 That Cindi has always been all business. I use Twitter for serious purposes, too, but I also like to have fun. Which is why I Tweet a lot more than she does (about 10 times as much, so far — but I had a head start).

As for the serious business, by all means go read her piece about other reform measures that would take us a lot further down the line that the one just passed doing away with the Budget and Control Board. It’s stuff I could recite in my sleep, since we started advocating for these things in 1991, but it’s important.

But I was never sure I had it right. So when the song came on the radio this morning, I flipped on my SoundHound app while waiting at a red light, and the lyrics that came up said that the line was… “Tin roof, rusted.” (And no, I wasn’t driving while I Tweeted. I waited until I was seated at breakfast.)

If that’s right, it’s a disappointment. I thought my version sounded kind of off, but it’s more logical as a response to “You’re WHAT?” Because, you know, much of the song has to do with traveling TO the Love Shack. So you might naturally tell someone you were en route.

But you don’t care, do you? I can see that. So go read Cindi’s piece. Edify yourself.

18 thoughts on “That Cindi is just all business, even on Twitter”