This is a good day to be Nancy Mace or Det Bowers. Because they are the only two of the crowd of people running against Lindsey Graham in the GOP primary who did not just sign a pledge to support the guy who called the senator “ambiguously gay.”

Here’s the money quote, which caused enough of a splash that Chris Cillizza of The Fix retweeted me when I mentioned it yesterday, leading to 17 other retweets and 8 favorites:

Feliciano said, “It’s about time that South Carolina (says) hey, We’re tired of the ambiguously gay senator from South Carolina. We’re ready for a new leader to merge the Republican Party. We’re done with this. This is what it’s about, all of us coming together and saying, one way or the other, one of us is going to be on that ballot in November.”

It was said by the (formerly) most obscure of the candidates, the suddenly-famous Dave Feliciano of Spartanburg, at a presser in which he and three others — Bill Connor, Lee Bright and Richard Cash — signed a pledge promising to support any one of their number who gets into a runoff with Graham. 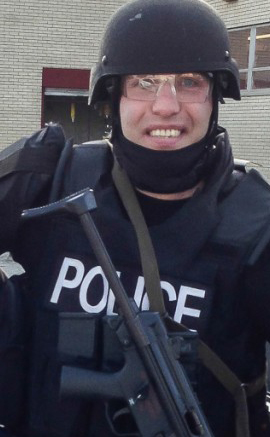 Dave Feliciano, in an image from his campaign website.

Just when you thought they couldn’t take ideology far enough…

After the presser, Connor and Cash both denounced Feliciano’s characterization of the senator, but both confirmed they would still stick to the pledge, according to The State. Bright reportedly left the event before Feliciano spoke, which shows he’s not named “Bright” for nothing.

I wrote to Bill Connor via Facebook a few minutes ago to ask him again, “would you really support this Feliciano guy over Sen. Graham?” Because I still find that hard to believe. But then, I find the attitude of the kinds of Republicans who would oppose Graham sort of hard to believe, so this is not surprising.

29 thoughts on “So are you truly, unambiguously going to support this guy?”