This release just in:

Columbia, SC – March 6, 2013 – South Carolina is facing a major shortfall of skilled, college-educated workers by the year 2030 to fuel its economic growth, according to a major new study prepared by two University of South Carolina professors. The study projects that at current rates, the state will have a shortfall of more than 100,000 graduating students with the necessary post-high school education to be hired.  To put things in perspective, that shortfall is greater than the seating capacity of either Williams-Brice Stadium in Columbia or Memorial Stadium in Clemson.

The study was conducted by Dr. Doug Woodward and Dr. Joey Von Nessen, top research economists in the Darla Moore School of Business. The study will guide the efforts of the Competing Through Knowledge initiative, a group of civic and business leaders seeking to enhance the state’s workforce preparedness through improved higher education.

Based on economic and demographic trends, Woodward and Von Nessen project that by 2030 South Carolina will have a shortfall of 44,010 workers holding two-year degrees and 70,540 workers who hold bachelor’s degrees or higher. This major projected deficit – if not addressed – could cast a shadow over South Carolina’s future, as the USC study notes: “The percentage of the population with a college degree is the single best predictor of a state’s national ranking in personal per capita income levels.”

“This report has to be taken as a call to action,” said Jim Morton, a retired senior executive from both the Michelin and Nissan companies and one of the civic leaders spearheading the Competing Through Knowledge effort. “If South Carolina is going to thrive as we all wish, meeting the educational needs of our growing economy has to be a top priority. Our state needs a comprehensive plan.”

The state’s need for skilled, college-educated workers by 2030 will double or almost double across the three levels of higher education cited in the report: jobs needing some post-high school work, those requiring a two-year degree or those requiring a four-year degree. This outlines a major challenge for the state’s technical colleges as well as four-year colleges and research universities.

The report also identifies several fields as likely to generate the greatest mismatches between what higher education is set to provide and what is needed, most notably the field of nursing. Nearly 40 percent of the shortfall projected in the S.C. workforce is expected in nursing; that is more than 17,000 openings for those with at least an associate’s degree in excess of what our colleges are expected to produce. Other fields that are projected to need thousands more workers than are projected include general and operations managers, schoolteachers and accountants, among others.

In the report’s conclusion, Woodward and Von Nessen write: “For South Carolina to create opportunities for its citizens to have access to good jobs and higher wages, it must create a workforce that is equipped with the skillsets that are in demand in the labor market.”

To help meet that challenge, the S.C. Business Leaders Higher Education Council launched the Competing Through Knowledge initiative. In the coming months, Competing Through Knowledge will be looking at South Carolina’s higher education system and current and future workforce needs. The group, featuring leaders from across the state and many different fields of expertise, will recommend specific on-the-ground changes in how South Carolinians are being educated.

Other states have brought a similar focus to making sure that they are doing all they can to prepare their workforce. In 2009, Virginia launched its Grow by Degrees plan, which resulted in several new initiatives to improve higher education being implemented there.

Former South Carolina Gov. David Beasley, a Competing Through Knowledge board member, said, “The Competing Through Knowledge project is about bringing business and higher education leaders to the table to identify the jobs of the future and create a strategy to make certain that South Carolina workers have the skills necessary to satisfy those jobs.”

The USC study can be accessed by following this link: competingthroughknowledge.org/assets/uploads/references/Higher_Education_Report.pdf

About Competing Through Knowledge

Competing Through Knowledge is an effort driven by business leaders to make South Carolina’s working citizens ready for the emerging economy and the state more globally competitive by 2030. It will work with higher education to assess how South Carolina, at the two-year and four-year levels, is preparing its workforce for the future. The goal is to invigorate South Carolina with the knowledge required to attract and sustain more advanced economic activity while preparing more of its citizens for broader opportunities, through the growth of better-paying industries and entrepreneurship. Learn more at www.competingthroughknowledge.org.

Do you find that a little hard to believe? Maybe it’s because my office is only about a block from the USC campus, and I often feel like I’m trying to move through an ocean of college students.

Yeah, I already knew that we weren’t churning out enough nurses. As for the rest — I see that we’re expected to fall short in “general and operations managers, schoolteachers and accountants, among others.” Except for the teachers, that sounds kind of like the folks who would have been placed on the B Ark from Golgafrincham…

Hey, it’s a joke, you general and operations managers! Can’t you take a joke? 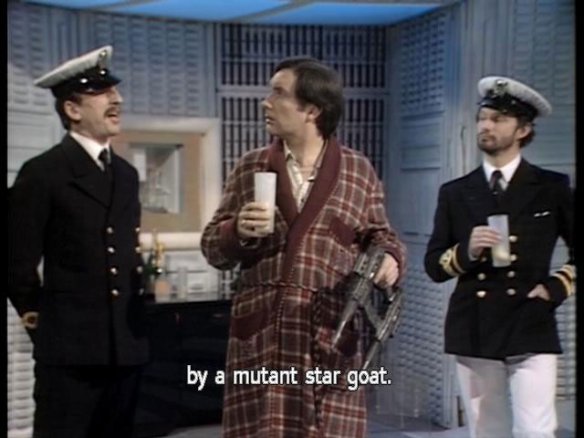 Aboard the B Ark from Golgafrincham, with Arthur Dent…