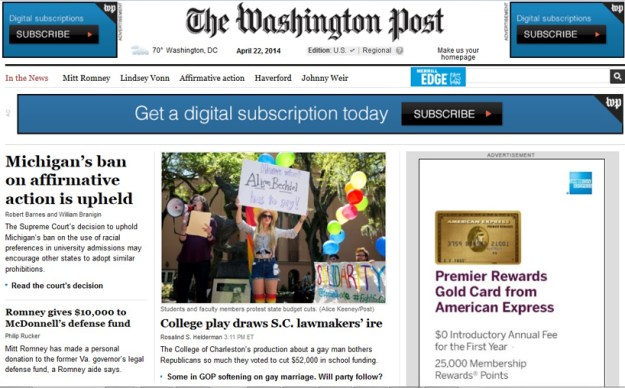 At this moment, the centerpiece story at the WashPost site is this one:

CHARLESTON, S.C. — More than 750 people packed into a city auditorium here this week for a sold-out production of “Fun Home,” a musical by a New York-based troupe about a woman coming to terms with her closeted gay father’s suicide. The crowd rose in a standing ovation before the show even began.

The emotional reaction was part of a worsening political battle between South Carolina’s public universities and conservative Republican lawmakers, who argue that campus culture should reflect the socially conservative views of the state.

The state’s House of Representatives recently voted to cut $52,000 in funding for the College of Charleston as punishment for assigning students to read “Fun Home,” the graphic novel that formed the basis for the play. House lawmakers endorsed a similar budget cut for the University of South Carolina Upstate in Spartanburg for using a different book with gay themes in its reading program.

Republican lawmakers also helped pave the way for the appointment of a controversial GOP state official as the College of Charleston’s next president, sparking campus protests.

The fights serve as a reminder that rapid national shifts on social issues — particularly gay rights — are hardly universal and remain hotly contested across much of the Deep South. The views of people in South Carolina carry particular weight given the state’s early presidential primary, which gives voters here the power to help shape the GOP ticket every four years….

It seems like WashPost regards this as a pretty big deal, on account of our early primary. I hadn’t thought of it that way until now.

Remember how, early in 2012, I worried about the way Kulturkampf issues were being used to divide us in that election? Here we go again, y’all — two years early…