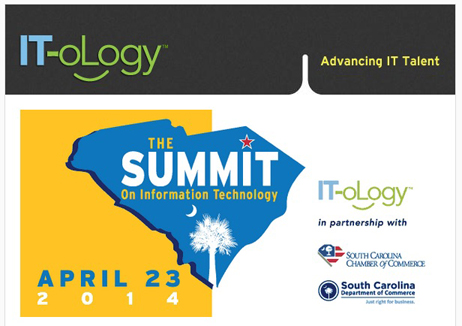 Our own Doug Ross attended IT-ology’s Summit on Information Technology today, and this is his report:

Nikki Haley did the quick welcome speech to the crowd this morning.  Never had seen her before in person…   I was impressed with her energy and her ability to speak without notes.  She laid out what will probably be a theme for the next few months:  a growing economy built on encouragingcompanies to come to South Carolina.    What was more indicative of what’s in store for Vincent Sheheen was when Ed Sellers (Chairman BCBS – you probably knew that) got up after Nikki left and said that Haley and her team (Bobby Hitt and others) were the best administration  he had worked with in 25 years in terms of economic development.   Otis Rawl followed Sellers with more praise for Nikki.    If I were Vincent Sheheen, I’d drop out now… I don’t think he’s going to come as close as last time.
The mayor also spoke briefly and did a good job of selling Columbia as a place to grow technology business.   He was late so he wasn’t in the room when Haley was there.    My cynical self wonders if that was on purpose.

As I’ve said many times, Nikki makes a great first impression, and connects really well with a group of people.

I agree that Vincent’s in trouble, and not only because he’s not as good at connecting with a crowd. Four years ago, the state chamber (Otis Rawl’s organization) backed him, which was extraordinary for a Democrat. I had already seen indications that wasn’t going to happen again. This is another indication of that.

And when a guy like Ed Sellers goes that far in his praise, it’s important. But I suspect he really mostly appreciates Bobby Hitt.

Something is going to have to change for Vincent Sheheen to be as competitive as he was last time around, much less win. The incumbent has positioned herself well for another four years, even without the Year-Of-The-Tea-Party advantage she enjoyed in 2010.