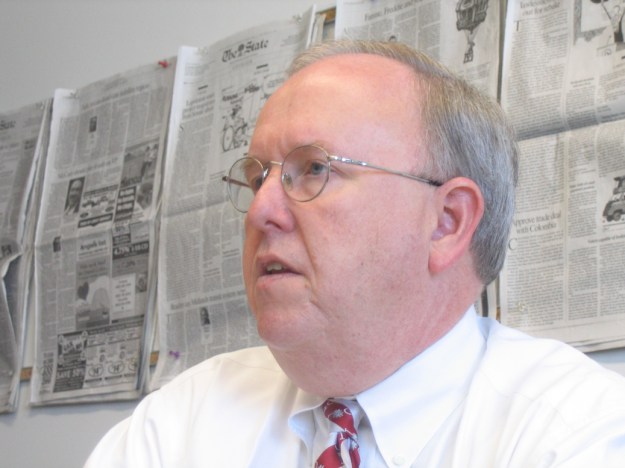 Mayor Bob, during an editorial board interview in 2008.

This was published several days ago, but I just saw it, so I’m sharing with others among you who are just as slow on the uptake.

I enjoyed this column by Kevin Fisher in the Free Times. An excerpt:

Where have you gone, former Mayor Bob? A city turns its troubled eyes to you, woo, woo, woo. What’s that you say, Cola Citizen? Gentle Bob has left and gone away, hey, hey, hey …hey, hey, hey.

First, my apologies to Simon and Garfunkel. And also to Mayor Bob, if he’s offended. I hope not, because it’s meant as a compliment.

Indeed, we could use a little Mayor Bob about now. Can you imagine him fighting with council members in public? With concerned citizens? With anyone? Of course not. As I wrote about Bob upon his retirement: “Coble was eminently approachable as mayor, making each person feel worthy in their opinions and welcome to share them.”

While I disagreed mightily with him on a wide range of policy and management decisions (or the lack thereof), I always liked the way Bob conducted himself both personally and in his role as the city’s elected leader. Council followed suit, as the mayor sets the tone. And therein lies a lesson that Steve Benjamin needs to learn….

Those of you who remember Kevin running against Bob several years back may be surprised at these comments, but you shouldn’t be. Kevin can be an irascible critic — and has gotten under Mayor Bob’s skin a little over the years — but he’s fair-minded, and he’s given former Mayor Bob his due before. Back at the outset of that 2006 campaign, he said of the mayor, “He’s a really nice guy, and much nicer than me.”

But he also saw that as a weakness. He criticized Coble for “waiting for consensus” to lead, and for not being tough enough to say “no” to bad ideas.

Now, Kevin — and probably others — are missing that “waiting for consensus” stuff. That’s not Mayor Benjamin’s style.

Basically, the two mayors have complementary upsides and downsides. With Bob, you really could go nuts waiting for him to step out ahead of the rest of council. He really wanted that consensus. Steve is too impatient for that, so you get a lot of action. But after four years of his impatience, he’s created enough irritation on council that the action is increasingly one-sided, and little gets done.

Although it does seem like the ballpark’s going to go through, it will do so at serious cost to the mayor’s remaining political capital. There are more rough waters ahead — waters upon which Bob Coble would have poured oil…