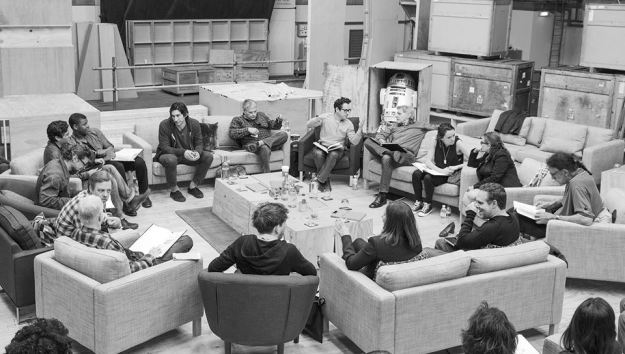 This is pretty cool — a picture of old and new cast members sitting around preparing for shooting to begin in a couple of weeks on the new “Star Wars.”

The Star Wars team is thrilled to announce the cast of Star Wars: Episode VII.

Director J.J. Abrams says, “We are so excited to finally share the cast of Star Wars: Episode VII. It is both thrilling and surreal to watch the beloved original cast and these brilliant new performers come together to bring this world to life, once again. We start shooting in a couple of weeks, and everyone is doing their best to make the fans proud.”

Star Wars: Episode VII is being directed by J.J. Abrams from a screenplay by Lawrence Kasdan and Abrams. Kathleen Kennedy, J.J. Abrams, and Bryan Burk are producing, and John Williams returns as the composer.

I wonder what character Max von Sydow will play — the ghost of Obiwan Kenobi, perhaps?

I guess that’s the back of his head, talking to Mark Hamill over on the left. There’s Harrison Ford on the opposite side of the circle, in front of R2D2. Is that Carrie Fisher two over to the right of him?

Aside from von Sydow, I don’t know the new cast members. But then, I didn’t know who Harrison Ford and Mark Hamill were, before the original film. Carrie Fisher I remembered from “Shampoo.” Who could forget?

12 thoughts on “The cast of “Star Wars VII” assembles”