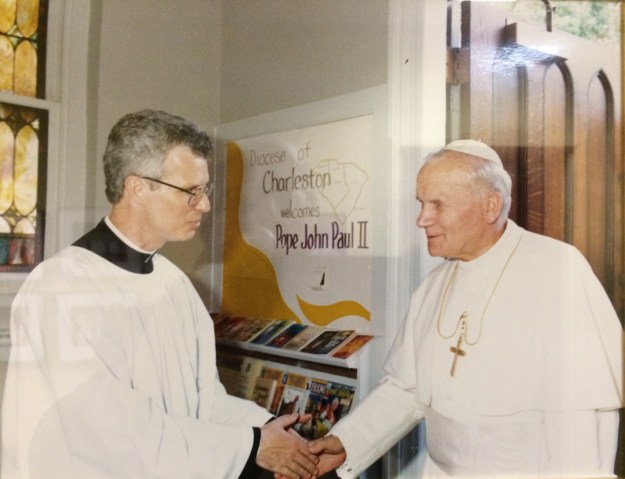 At Mass yesterday, I got to thinking about it being Pope John Paul II’s big day, after which he will henceforth be called SAINT John Paul.

I have a lot more memories of him than I do John XXIII. In fact, as important as he was, I really have no memories of John XXIII. I didn’t grow up Catholic, and my earliest memory of being aware of a pope at all have to do with Paul VI.

We particularly remember John Paul because he stopped by our church, St. Peter’s, when he was in Columbia on Sept. 11, 1987. I missed the ceremony because I was one of the editors responsible for our coverage of the papal visit, and couldn’t leave the office. I did get to see the Popemobile arrive at Williams-Brice Stadium, though — some of us climbed up on the roof of the old newspaper building (which now belongs to ETV) to watch the motorcade arrive — then went back to work.

But the visit is commemorated with a huge marble plaque (below), and various photos on the walls from the day. So I feel like, as a parishioner, I was a part of his visit to our church.

Of everything written about yesterday’s double canonization, I was most impressed by this piece, which explained how meaningless it is to speak of John as a “liberal,” and John Paul as a “conservative:”

Here’s the shorthand narrative about the canonizations of Popes John XXIII and John Paul II on Sunday that you’re bound to hear this weekend (or may have already heard). Ready? The first was a liberal, and the second was a conservative.

As with most black-and-white descriptions, this one falls short. To begin with, the terms “liberal” and “conservative,” as commonly understood in the modern political sphere, fail when applied to the church, which has always transcended such categories. The terms also limp when it comes to describing the former Angelo Roncalli and Karol Wojtyla.

To wit, the installation of the “liberal” Pope John wasn’t even an installation. Technically, it was a “coronation,” with the former cardinal-archbishop of Venice carried into St. Peter’s Basilica seated upon a grand sedia gestatoria (literally a “chair for carrying”), an ornate throne borne on the shoulders of 12 footmen, before he was crowned with a bejeweled triple tiara. John’s pronouncements used the papal “We,” and he once issued a document called “Veterum Sapientia,”recommending the use of Latin in seminary training and throughout the universal church. Indeed, one of his closest advisers and his personal secretary, the now 98-year-old Cardinal Loris Capovilla, called him a “great conservative.”

As for the “conservative” John Paul II, he issued several encyclicals that included slashing critiques of the excesses of capitalism and repeatedly called for justice for the poor; he was the first pope in history to visit a synagogue; he opposed many causes that U.S. conservatives supported (for example, the Iraq war); he tirelessly built bridges to other faiths, joining with other religious leaders for the first World Day of Prayer for Peace in Assisi, to the consternation of many in the Vatican; he issued sweeping apologies for past wrongs committed by the church (to, among others, Jews, women and those persecuted during the Inquisition); and finally, in a way no pope had ever done, he made full use of almost every form of media available to spread the Gospel….

The ways most people use “liberal” and “conservative” today are indeed nonsensical within the context of the Church. Which is one reason that I, as a Catholic, am personally uncomfortable with both labels… 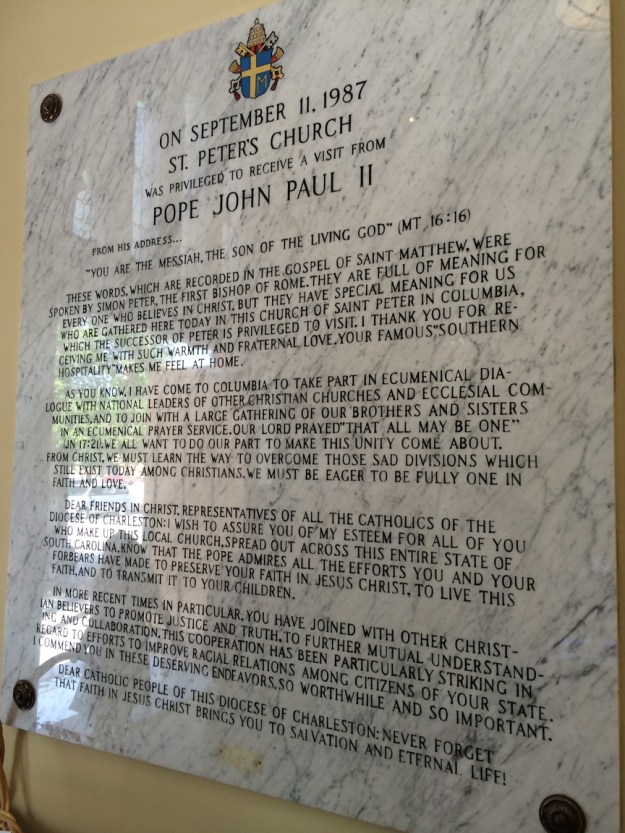 The huge plaque just inside the front door of St. Peter’s — a few feet from where Msgr. Lehocky welcomed the pontiff.