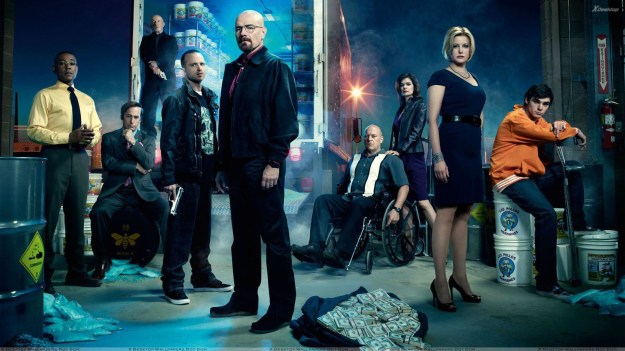 Does “quality” really have to be so dark, so morally arid?

This is by way of following up on a brief exchange Kathryn and I had yesterday about the dearth of appealing characters in the TV shows that currently compel our attention.

Bryan sent me a link to this piece, headlined “The Moral Relativism Of Serial Television.” It’s actually several years behind the curve, with this observation:

The sweet spot for serial television drama right now exists on non-premium cable channels. After decades of dominance by the broadcast networks, followed by a period in which the premium cable channels broke the mold with hits that reached mainstream culture like Oz, The Sopranos, and Dexter, non-premium channels like the Fox property FX, BBC America and AMC have rushed in to, at least temporarily, hold a lock on the highest volume of compelling drama on the small screen today.

That’s something I might have said two or three years ago (think “Mad Men,” “Breaking Bad,” “The Walking Dead”). What I sense happening now, or about to happen now, is a shift beyond non-premium cable TV, and on to series made for streaming and bingeing, such as “House of Cards” and “Orange is the New Black.”

But the general observation of the piece is that there is a seemingly deliberate lack of characters to root for, or even care about, in the most compelling recent dramatic series.

It ends, as do so many episodes of these popular series, on a dark note:

It is at least marginally troublesome that as a society, our most compelling entertainment increasingly eschews the concept or even the ideal that good exists in the world and ultimately should prevail. An artistic criticism of this view can legitimately point out that life is rarely so neat as to allow for the inevitable victory of the white knight. However, the rejoinder to this point is that we are not considering real life but rather television, which exists because we would rather watch it than real life. The entire raison d’etre of the medium is to idealize real life interactions into conclusions that are satisfying on at least some visceral level. If our television tastes are any guide, America increasingly takes satisfaction from a muddled mess of emotional responses which are provoked by disorderly and sometimes directly contradictory stimuli. Perhaps, if a society can be judged by its entertainment, what we are witnessing is the leading edge of the end of America’s desire to collectively be the good guy, or even to support the good guy in his efforts to be good. Or perhaps we don’t need television to tell us this; perhaps we need look no further than the ballot box.

Do we really not want to find good in characters and root for it? I don’t think that’s the case, although there’s no doubt we are living in a more cynical world than the one I grew up in.

I think we are still human, and there is still good in us, and within us lives a desire to perceive good, and embrace it — however many times we’ve been disappointed. I think the dark, moral emptiness of these recent entertainments is a function of writers and directors who are trying to produce high-quality material, and who buy into the insidious notion that moral clarity is lowbrow and insufficiently “artistic.” So they steer clear of it.

But does “quality” really have to be so dark, so morally arid?

I think if someone would come along and produce similar series, but with the humanity-affirming characteristics that marked “The West Wing,” the world would joyfully cheer, and reward the effort with their loyal patronage.

Think of that — a new series with the cinematic quality of “Breaking Bad,” but with characters like Jed Bartlet and Leo McGarry and Josh Lyman — characters you want to see succeed. As I watch the series for the first time, each night as I work out, I simply don’t see any characters who are utterly lacking in appealing characteristics. Even the adversarial figures who try to thwart our heroes have understandable, sympathetic reasons for taking the positions they do. While there are occasional digressions from this approach (one of the weakest scenes I’ve encountered was the one in which Jed Bartlet humiliates a character based on Dr. Laura with what he seems to imagine is a clever manner, but which is painfully trite — by asking her whether she literally supports all of the strictures in the Old Testament), by and large there is an appealing understanding of everyone’s motives.

Which is the way we should all live our lives. We should take strong stands based on what our discernment has taught us to believe is right, but strive to appreciate the convictions of those with whom we disagree. It could serve as an antidote to the default mode of today’s partisans, which is to demonize opponents, and scoff at their motives.

Imagine that — television that not only gives us heroes to root for, but which shows us ways to be a better society.

Now that would be television worth watching.

19 thoughts on “Does ‘quality’ television really have to be so morally arid?”