I missed this release yesterday, but it still seems to me worth sharing:

“The President’s decision to set an arbitrary date for the full withdrawal of U.S. troops in Afghanistan is a monumental mistake and a triumph of politics over strategy. This is a short-sighted decision that will make it harder to end the war in Afghanistan responsibly.

“The President came into office wanting to end the wars he inherited. But wars do not end just because politicians say so. The President appears to have learned nothing from the damage done by his previous withdrawal announcements in Afghanistan and his disastrous decision to withdraw all U.S. forces from Iraq. Today’s announcement will embolden our enemies and discourage our partners in Afghanistan and the region. And regardless of anything the President says tomorrow at West Point, his decision on Afghanistan will fuel the growing perception worldwide that America is unreliable, distracted, and unwilling to lead.

“The alternative was not war without end. It was a limited assistance mission to help the Afghan Security Forces preserve momentum on the battlefield and create conditions for a negotiated end to the conflict. The achievement of this goal, and the withdrawal of U.S. troops in Afghanistan, should be determined by conditions on the ground, not by the President’s concern for his legacy.

“All wars end. The question is how they end. The war in Iraq has ended in tragedy. And it is difficult to see how we can succeed in Afghanistan when the President tells our enemies that our troops will leave by a date certain whether they have achieved our goals or not.”

On a side note… I’ve pretty much gotten Kelly Ayotte playing Shemp to Joe Lieberman’s Curly, but I still miss the old Three Amigos. By the way, I went looking at her website to remind myself what Sen. Ayotte looks like, and as my old softball teammate Dave Moniz would have said, key lid… 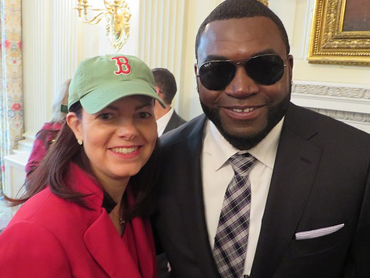 And yeah, that’s David “Big Papi” Ortiz with her.