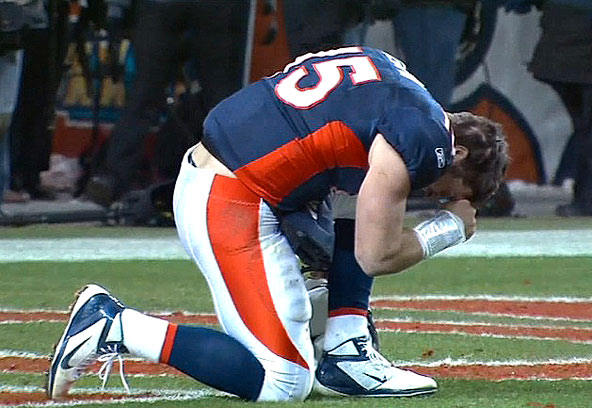 I almost never read Cal Thomas’ columns. I find they tend to have a certain sourness about them, whatever the point. Or maybe the expression on his mugshot just inclines me to perceive a sourness.

Whatever the case, I was drawn in to his column in The State this morning by the image of Tim Tebow kneeling.

The main point of the column didn’t interest me much — it was of a certain type, which we see written from the perspective of an ideologue complaining that ideologues of the opposite camp have a double standard, and criticize people of the writer’s camp for doing a certain thing, but don’t criticize people of their camp when they do the same thing. You know what I mean. You’ve read this one a million times.

In this case, he was angry that people who vehemently defend a guy named Michael Sam — apparently someone who people who follow football know all about — did not equally defend Tim Tebow when he was playing the game and taking a lot of flak.

The part of that that interested me was the Tim Tebow part.

And here, I’m going to have to ask you to bear with me as I propose an anachronistic topic. I realize that everybody who follows football, or is really into Culture War stuff, thoroughly hashed and rehashed everything there is to say about Tebow years ago. Well, I didn’t. I get interested in stuff when I get interested in it. Like “The West Wing,” which I will continue trying to interest y’all in discussing until I run out of episodes to watch on Netflix… and probably far beyond.

The advantage to you of a topic like this is that y’all have already thought it out and have wonderfully well-honed, nuanced positions on it. So you’re ahead of me. Assuming you can still remember your positions after all this time.

While everyone who followed football was really, really into taking strong stances on Tebow, I was peripherally aware of him. And what I was aware of was the kneeling thing. The “Tebowing.” Because it was kind of hard to miss, permeating visual media the way it did.

And each time I saw the image, as this morning, I wondered what to think of it. And I was always of two minds, at least.

On the one hand, it’s great that a guy isn’t embarrassed about his faith, and willing to witness to it in public — and in his case, in a considerable spotlight. On the other hand, it was awfully showy and “look at me,” seemingly a textbook example of what Jesus spoke against in Matthew 6:5.

And I find myself wondering whether Jesus’ judgment on this topic was culture-specific. He was speaking in a time and place when public prayer was a way of raising yourself in public esteem. Whereas, as Tebow himself can attest, doing so now subjects you to considerable abuse and ridicule. Especially when you play for a New York team.

Finally, on the third hand (yes, I know this metaphor is no longer working), I like the Tebowing gesture totally apart from theological questions. I’m a big fan of Arthurian legend — I may have mentioned that before — and Tebow’s gesture evokes the kneeling knight, his sword held before him like a cross. Which, to a geek like me who thinks pre-Raphaelite paintings are cool and not at all trite or corny, is appealing.

Thoughts? Or is this just too anachronistic for y’all? If so, I won’t try yet again to get a thread going on the Royal Navy during the Napoleonic Wars… 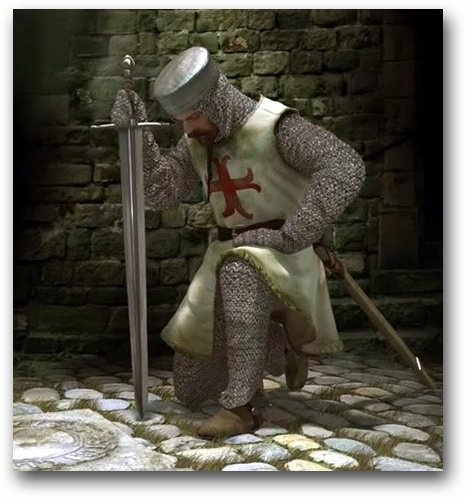 17 thoughts on “On the somewhat retro topic of Tebowing”