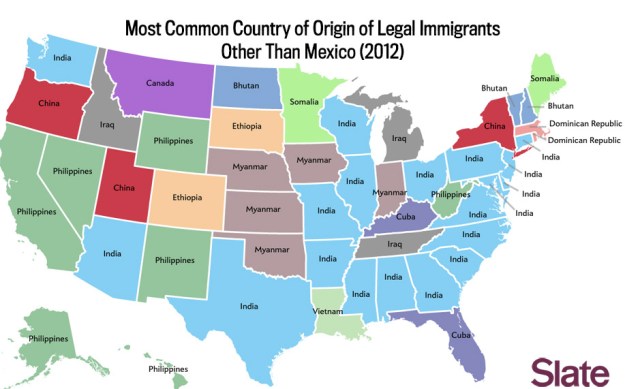 The intuitive answer — Mexico — is correct as the answer to the question, “Where do most immigrants (or rather, a plurality of them) in South Carolina come from?” Nationally, about 15 percent of new immigrants come from our neighbor to the south, and that’s enough to put Mexico out ahead in most states.

That’s according to a map Slate put together based on Department of Homeland Security figures.

But what country comes in second? It may surprise you — it did me. It’s India. Where Nikki Haley’s people are from. Throughout the Deep South, Mexico is first and India is second. And in Virginia, Pennsylvania, New Jersey, Delaware and Maryland, India comes in first.

The maps offer some interesting groupings. In the very center of the country — Oklahoma, Kansas, Nebraska and Iowa — the second-largest immigrant group is from Myanmar. And in Tennessee and Idaho, it’s Iraq. I don’t know why.

27 thoughts on “Where does the SECOND largest number of immigrants to SC come from?”