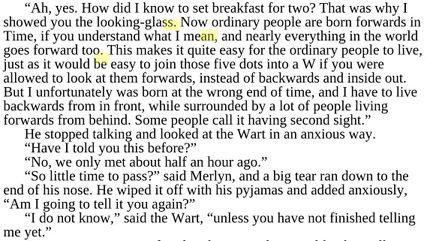 I’ve been thinking about the passage above from The Once and Future King. The boy Wart has just met Merlyn for the first time. Merlyn, who experiences time backwards, asks how long it’s been since they met. When the boy tells him, he is deeply saddened, because he is about to lose his dear friend of many years.

In my own strange temporal distortion, made possible by Netflix, I am experiencing “The West Wing,” a series that everyone else saw a decade ago, for the first time. What is old to everyone else is fresh and new to me. And it has renewed me physically as well as regaling me mentally — it’s made me enjoy working out every night, and getting in shape.

But I just discovered something upsetting. I had heard that the series was only as wonderful as what I’ve been experiencing during the years that Aaron Sorkin wrote it. I had looked forward to a full seven seasons of delight, watching the episodes each night while striding away on the elliptical. But I happened to discover that Sorkin stopped writing them at the end of the fourth season.

I watched “Life on Mars,” the 21st episode in the fourth season, Tuesday — the night before my accident. There are only two episodes left in the season. Had I not banged my head, I would have watched them both by now, and would be feeling rather bereft.

Are my friends about to abandon me? The lovely Ainsley, appealing on so many levels, including the all-important UnParty level, has already left, without a warning and with no goodbye, replaced most disappointingly by Matthew Perry. (Donna seems to find it an acceptable substitution, but I lack her glandular bias.)

I look forward to getting back up on the elliptical, but I dread running out of good episodes. I would hate to see the quality decline — it would be like being bitterly disappointed by a friend. And I’m not sure what to do if I no longer have good episodes to watch. I’ve tried getting into other series available for streaming on Netflix. I watched the first episode of “Dexter,” which many have praised, but was quite disappointed. I’ve tried getting into the various series in the “Star Trek” canon, but I doubt I’ll ever be a Trekkie.

There’s got to be something else out there as delightful as these four seasons of “West Wing.” But I haven’t found it yet. And doubt that I shall. It rivals my previous uncontested favorite series, “Band of Brothers” and to me, exceeds “The Sopranos.”

I sense a long quest before me…

Will my friends all abandon me now?

39 thoughts on “Am I about to run out of good ‘West Wing’ episodes?”