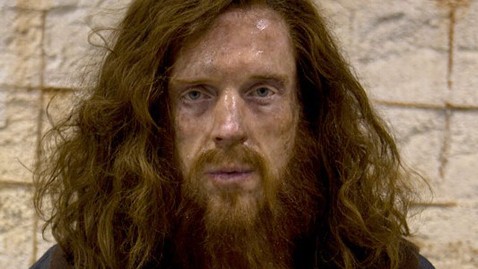 No, I’m not saying he’s a terrorist or anything. I’m talking about the very beginning of the TV series — the initial, apparent situation of Gunnery Sgt. Nicholas Brody, freed after years in the hands of terrorists.

Initially, to the public at least, the situation seemed entirely straightforward — an American hero had been returned to his country and the bosom of his family (never mind the situation with his wife, which that phrase brings to mind). Delta Force had gone and gotten him — no negotiating with terrorists — and brought him right home. The country had a celebration, and everyone acted as though he would of course (being a Marine) have completely uncomplicated feelings toward his country. Politicians of the flag-waving sort couldn’t wait for him to run for office.

That he turned out to have been brainwashed into becoming a terrorist, in a case of Stockholm Syndrome taken to the nth degree, was a surprise to everyone except the viewer.

By contrast, we have the curious case of Army Sgt. Bowe Bergdahl, which has degenerated over the weekend from being a topic of celebration to a point at which, if you type “Bergdahl” into Google, the first guess you get is “Bergdahl deserter:”

From the beginning, there was something… off… about this case. Something I kept trying to shove aside because I wanted to be happy for this soldier and his family.

The first hint was a mention, in the first news story I read, that Bergdahl had fallen into Taliban hands after “walking away” from this unit. Say what?

Then I saw the parents celebrating with the president. OK, POTUS wouldn’t do a thing like this if there were anything fishy about the case, would he? So it must be what it seems to be — the joyous return of the last American held by enemy forces in either the Iraq or Afghanistan theater. So, hurrah.

I was shoving aside my reaction of, “Wait a minute. We don’t negotiate with terrorists, do we?” I was ignoring my concern that we were putting five hard cases back on the street. So what if the Qatar one-year cooling-off thing didn’t comfort me much? Never mind that if they hadn’t renounced the Taliban in all these years at Gitmo, why would a year in Qatar keep them from rejoining the jihad? I decided to take the president’s “no man left behind” explanation at face value, and move on.

I set the whole thing aside until this morning, when I saw another picture of the Bergdahls on the front of the WSJ. Which made me think again, just how young are these people? The sergeant’s Mom is kind of a babe, and his Dad… well, I’d been suppressing my reaction to the Dad’s appearance. It occurred to me maybe he had sworn not to shave or trim his beard until his son was home — and I’ve seen references to that effect since. But I was still curious about them, and started to search.

That’s when I got the “deserter” reference. I first brushed past it, seeking info about the Bergdahls mère et père, but then came back and pursued it, and quickly found: 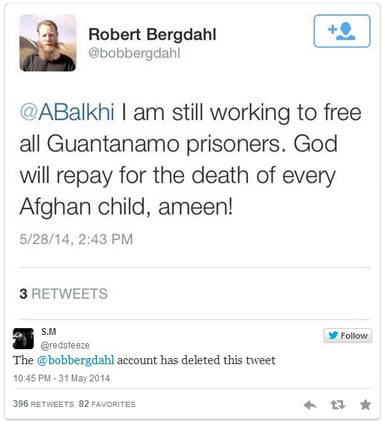 … which would be weird on a couple of levels, not least because it made it sound like releasing people from Gitmo was the Dad’s actual motive here — rather than an unfortunate thing that was necessary for his son to be freed. Which would be the kind of thing you’d expect from a Dad invited to celebrate with the president at the White House.

But the point made by John McCain that these were very bad guys we were letting go — that worried me.

And it particularly worried me if what we got in return was a guy who may be facing charges for the circumstances in which he was captured.

This is just a very weird case. And it’s particularly weird that the president would take such political risk — negotiating with the Taliban, releasing their people without consulting Congress — for a soldier whose story is so very muddled.

I find myself wondering if there’s something we’re not being told. Maybe Sgt. Bergdahl was on a mission, say — sent into Taliban hands as an agent provocateur and so to those in the know, there’s nothing suspect in his behavior, or … But then I think, I’ve watched too many movies and TV shows with strange plots.

I don’t know what to think. I know that it’s now hard to greet this soldier’s return with complete, unalloyed joy. Which is a terrible shame. I don’t like having this reaction. I hope what I learn going forward sweeps all doubts away…