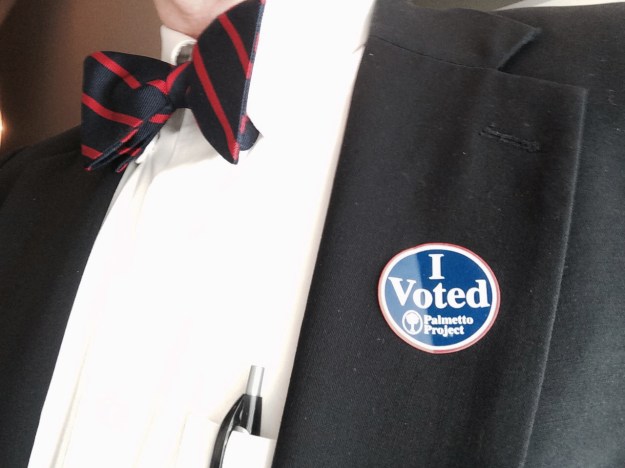 Well, I did, and I was the only voter at the time. I was greatly outnumbered by poll workers, poll greeters, and media. It was 8:41 a.m., and I was the 46th voter to take a Republican ballot. Exactly one person had voted in the Democratic runoff.

Of course, I HAD to take a GOP ballot, having voted Republican two weeks ago. But had I not been wrongly, unfairly forced to do that (you should be able to vote in both primaries, any time), I would have anyway. I don’t think there was anything on the Democratic side other than superintendent of education, and I didn’t have an opinion on that choice. (Had I voted in that, lacking a view of my own, I likely would have accepted The State‘s recommendation and gone with Tom Thompson. As you may know, I generally, but not always, vote a straight State paper ticket.)

Whereas on the GOP side, I not only had superintendent of education and lieutenant governor, but a hotly-contested county council race.

On my way in I did something I don’t usually do, which is reveal how I was going to vote. Chalk it up to that knock on the head the other day; I cracked under questioning. And since I did it in the presence of the press, I’ll share it with you. I stopped to say hey to Tim Dominick from The State — he shot the picture below at my precinct (I hope The State won’t mind my sharing it — here’s the link to where I got it). He was chatting with a lady who urged me to vote for Bill Banning, for county council. Not feeling like being cagey, I said I would.

That shouldn’t come as a surprise to anyone who read this story, or who otherwise has been paying attention. A key excerpt:

In other words, Tolar is sort of the tea party option. I mean, seriously. Anybody who thinks taxes are too high in Lexington County is not likely to get my vote. 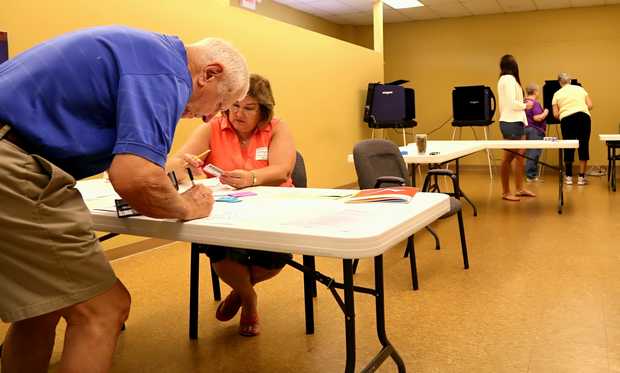 Quail Hollow precinct, right before or after I was there. Photo by Tim Dominick of The State; click on it to read the story at thestate.com.

26 thoughts on “Did you vote today? Were you the only one there?”