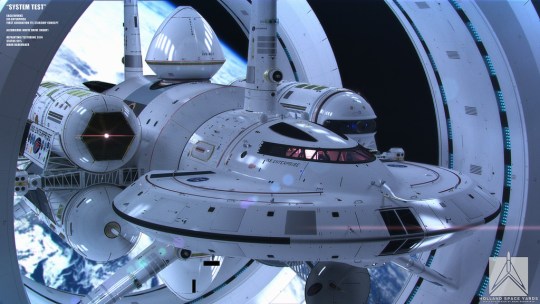 This is the coolest thing I ran into over the weekend. I think the info has been out there awhile, but it was new to me when I saw it at the WashPost site.

First, there’s a guy at NASA, engineer and physicist Harold White, working on how to make a warp-drive spaceship, a true starship, a vehicle that can move at speeds exceeding the speed of light. Which, it is believed, may one day be possible.

And now, to boldly go where no designer has gone before, Mark Rademaker — who is collaborating with White — has created a CGI design concept for the “warp ship.” They’re calling it the IXS Enterprise.

Admittedly, the pictures are less about getting to the other side of the galaxy, and more about getting kids excited about pursuing STEM careers. But they’re a lot of fun anyway. You can see more images at Rademaker’s Flickr account.

White explains in detail how his warp drive would work in the video below. But for those of you who want the quick, oversimplified version, basically it works “by expanding space-time behind the object and contracting space-time front of it.”

A disappointing aspect of that is that it makes for a bit of a clunky design. In the photo above, I saw that structure around the ship and thought it was docked in a construction bay, or making a stop at a space station. No, apparently, that huge ring is part of the ship — an essential element to making the warp drive work. “The rings are most important as they will form the Warp bubble,” says Rademaker.

But maybe they can streamline them some before NASA’s ready to “boldly go.” Which is bound to be awhile, given that NASA currently has no operational spacecraft. We’ll see. Or our descendants will, anyway…