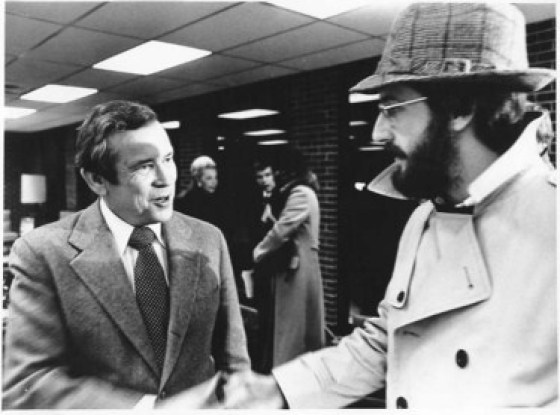 This came in a little while ago from The Washington Post:

Former senator Howard H. Baker Jr. of Tennessee, who framed the central question of the Watergate scandal when he asked “what did the president know and when did he know it?” and framed portraits of history with his ever-present camera while Senate majority leader and White House chief of staff, died June 26 at his home in Huntsville, Tenn. He was 88.

The cause was complications from a stroke, said longtime aide Tom Griscom….

That’s me with Baker in Des Moines, Iowa, in 1980. I had just arrived to cover him as he campaigned for the presidential nomination. It’s a shame that he didn’t do better than he did.

And it’s a greater shame that there are so few pragmatic centrists like Baker left — a fair-minded conservative who did not hesitate to grill the Nixon administration to discover the truth.

We still have Lamar Alexander, who comes out of that same commonsense Tennessee Republican tradition — people who gained high office before the Reagan revolution, and before the hardening of ideological positions on both ends of the spectrum. Our own Lindsey Graham is made from a similar mold — although, being of a later generation, he is more marked by the partisan wars than Baker ever was.

But the Howard Bakers, the Sam Nunns, the Scoop Jacksons… they’re all gone. And we’re worse off for it…

8 thoughts on “The passing of Howard Baker”