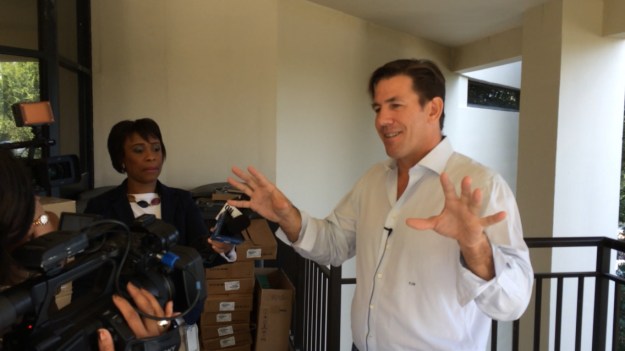 First came this one:

“I struggled with this decision in light of the political campaign I am undertaking,” Ravenel said. “Ultimately it came down to this: It doesn’t make sense to turn down a platform that enables you to spread your ideas to a bigger, more diverse audience. If America is ever going to turn things around, we’ve got to get rid of this notion that cookie cutter politicians with their blemish-free backgrounds are the way to go. The truth is those are the very politicians who are driving this country into a ditch. That’s never been who Thomas Ravenel is – and so owning a part of my life that doesn’t fit the typical political mold is fine by me.”

Then came this one:

“Lindsey Graham is nothing but a puppet of the far left – and he’s never going to cut the strings. In fact his silence on contributions like this means he’s just fine with the gun-grabbing efforts of politicians like Michael Bloomberg – and with liberal special interests bankrolling his reelection effort,” Ravenel said. “This is why the Republican brand is dying – because politicians like Lindsey Graham are bought and paid for by this country’s liberal elite.”

Ravenel added that this wasn’t the first time liberal money had washed up in South Carolina on Graham’s behalf.

“When Lindsey Graham joined John Kerry in pushing for a new energy tax hike in 2009, the far left flooded South Carolina’s airwaves with ads defending him,” Ravenel said.  “They’ve been holding the purse strings – and pulling his strings – for years. He’s nothing but a puppet.”

Ravenel also called out the state’s “Republican” establishment for its hypocrisy.

“This week the SCGOP attacked me on Lindsey Graham’s behalf – but now we learn the party’s former chairman is getting a quarter of a million dollars from Michael Bloomberg to defend Graham’s liberal policies?” Ravenel said. “And they have the audacity to call me an ’embarrassment?’ The only embarrassment here is a so-called Republican establishment, led by Lindsey Graham, that would rather go to bat for the far left than stand up for you – the tapped out taxpayer.”

My question is, how does the campaign expect anyone to pay attention to the second one after they’ve read the first one?