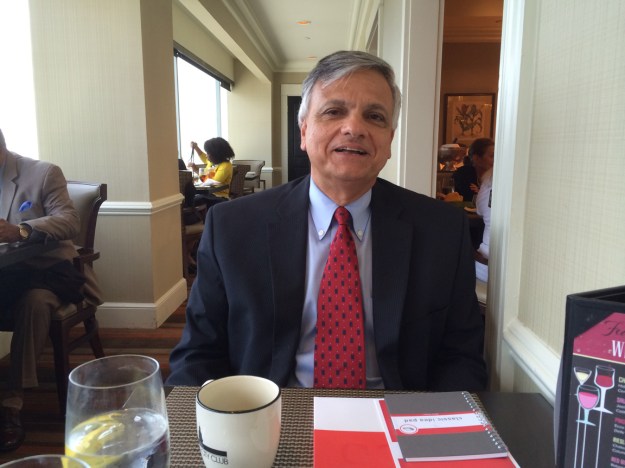 Some of you — the ones involved in state politics or media at the time — may remember Chris Verenes, the young executive director of the SC Democratic Party back in the late 80s.

I had sort of lost touch with Chris after those days, when I was governmental affairs editor at The State. I knew he had gone to work for Westinghouse at Savannah River, which sort of placed him in that area, but I was totally surprised to run into him at an event several months ago, when Midlands Fatherhood Coalition introduced itself to community leaders in Aiken. (The Coalition would formally open its Aiken office in July.)

Chris was his same genial, unassuming self. I had been feeling bad because I hadn’t worn a tie to the event — the ad game has had that casualizing effect on me, so that I don’t wear one most days now — and most men at the event were better-dressed than I.

Chris made me feel better because he was in a golf shirt, giving the impression that he’s doing something really laid-back these days.

But it turns out he’s a bank president — even though he neither dresses nor acts like Milburn Drysdale. He’s president and CEO of Security Federal Bank. His golf shirt had the bank logo on it. That’s the way executives dress every day at Security Federal, a community institution that started in Aiken back in the 1920s, but has grown and expanded into Richland and Lexington counties over the past decade.

In fact, he had to write a memo to himself to wear a coat and tie today, since I had invited him to lunch at the Capital City Club. As you see in the photo above, he remembered.

I enjoyed hearing from him about Security Federal, which he said differentiates itself by offering very customer-oriented services, from late hours and being open on weekends to offering financial advice that’s more about maximizing financial advantage to the customer than to the bank. The bank also has several employees devoted entirely to providing individualized coaching in financial literacy — a service he made a point of offering to the Dads who are helped by Midlands Fatherhood at the grand opening.

That kind of human-scale, community-oriented approach seems to fit Chris Verenes to a T, and I can see how he has thrived in that environment. As he tells it, he found a great bunch of people to work with.

But what I want to share with y’all is this: As we were heading to our cars in the garage after lunch, Chris was remembering his days in politics, and he shared this: He has been blessed by working with some superlative people in leadership positions at Security Federal, people he admires for their intellect, their community spirit and their selflessness.

But, he remembers, he also got to work with people like that in SC politics. He felt privileged to get to know people like John Spratt and Butler Derrick. And he noted that while, for multiple reasons, he found himself supporting Nick Theodore in his successful bid for the 1994 Democratic nomination for governor, he has the greatest respect for Joe Riley, who just barely lost the runoff to Theodore that year (which to me, is one of the saddest election results in my time covering SC politics, a huge missed opportunity for our state).

Y’all will recall that I tried making that point — that politics features a lot of really admirable people, and that most pols, even the more ordinary ones, are people who sincerely want to do good, according to their notions of “good” — on the radio recently. Only to draw heavy scoffing from Will Folks.

Of course, that’s a point I’ve tried to make fairly regularly, in one way or another, here on this blog, only to hearing multilateral scoffing from our more cynical friends.

But there are, and have always been, a lot of good people in politics. People like Chris Verenes, to name one — a guy many of you may not be familiar with, but who was involved in politics for the right reasons, trying to make a positive difference. And still strives to do the same today.

One thought on “Catching up with Chris Verenes, now a bank CEO”