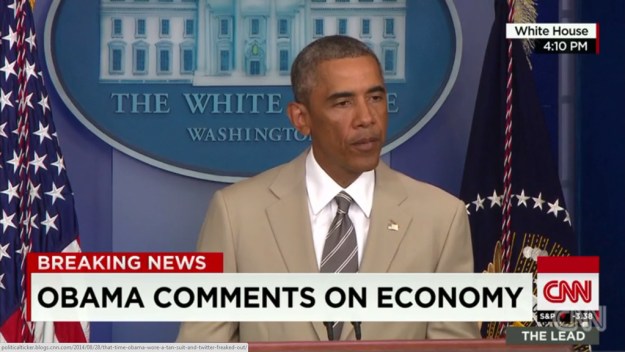 And oh, yeah — what’s with the tan suit?

Yes, that headline is my way of admitting that I don’t have a strategy for dealing with ISIS/ISIL/Islamic State/QSIS. I don’t even know how to solve the confusion over what to call them.

But then, I’m not POTUS. And the man who is is taking a lot of flak for his honest admission yesterday that “We don’t have a strategy yet.” (Possibly the worst such gaffe since Toby Ziegler said C.J. Cregg could go to Ramallah to “swat at suicide bombers with her purse.”) Which he perhaps deserves, for having made some of the decisions that led to the metastatic growth of the former al Qaeda in Iraq that has turned into that new thing, a self-financing, blitzkrieging army of bloodthirsty terrorists.

But having left Iraq without any sort of residual force to act as a counterbalance to instability, and having ignored the advice of his entire national security team three years back when there was still a chance to prop up some moderate alternatives in Syria, I’m not entirely sure what the president should do, what we should do, now.

Which is why you might see me indulging myself in irrelevancies, with the rest of the ADD brigade, over such trivia as the president’s tan suit. Sorry about that. But truly, I’m at a loss for more helpful observations to offer.

And, oh, yeah — Russia is invading Ukraine with impunity. (At least the president is visiting Talinn to express support for a nervous NATO ally, for what that’s worth. I’m not sure how reassuring that will be. They’ll probably be on pins and needles hoping he doesn’t say the words, “red line.”)

Any ideas, folks? I’ll be glad to pass them up to the White House.

Seriously, I’m glad the president wants to get his ducks in a row and have a strategy, instead of the fits and starts of our actions thus far, which have had a “what are we actually trying to do?” feel about them. Although driving them from Mosul Dam was encouraging, as was rescuing the Yazidi. But we need something a little more thought-out, and effective, than a #bringbackourgirls type of reaction to outrages.

And I hope this administration is up to it. A lot of people — including, I saw this morning, Maureen Dowd and Eugene Robinson, not your usual Obama-hating suspects — seem to have their doubts these days.

26 thoughts on “HERE’s a strategy for dealing with ISIS: Let’s do them the way the Aggies did the Gamecocks”