I don’t disagree with any of the “experts” who say Nikki Haley is the favorite to win the gubernatorial election this year.

But I do take exception to this observation:

The panelists stopped short of criticizing Sheheen, whom Winthrop University political science professor Scott Huffmon called “a great candidate” because he came so close to knocking off Haley last time. But when asked by Bierbauer what Sheheen has done in the past four years to strengthen himself as a candidate, they mostly kept silent….

That silence suggests something that we frequently hear here, particularly from Doug: That Sheheen hasn’t been a leader in his job as state senator. 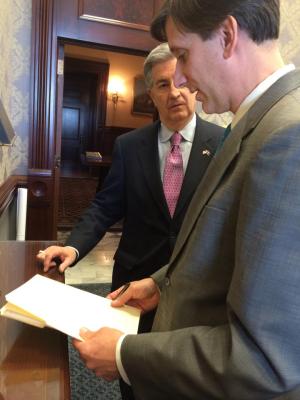 Sheheen has done little to tout his successes as a lawmaker.

Actually, in terms of being a guy who gets things done in the Legislature, Sheheen has done quite a lot.

In the past year, significant progress was made on two things that Sheheen has been pushing vocally and visibly: The elimination of the Budget and Control Board and 4k expansion.

Argue how much of that was Sheheen if you’d like. For instance, his opponent had identified herself strongly with the restructuring initiative. But the fact is that Sheheen was pushing this bill, and working on his colleagues to promote it, since well before Nikki Haley ever decided to run for governor. (Which is kind of how long it takes for a good idea to seep into the heads of a majority of lawmakers.)

Those aren’t his only accomplishments. He was a significant player in the ban on texting-while-driving. The first two are much more impressive to me, however, as reflecting the kinds of strategic, fundamental changes that we need for South Carolina to progress.

What puzzles me is that we don’t see Sheheen touting these successes as a reason to vote for him. Instead, we see money and effort wasted on repeated attempts to get folks angry at the incumbent about the Department of Revenue hacking.

I don’t know why…

39 thoughts on “Little-noticed fact: Sheheen has had a stellar legislative year”