Does the public transit system in Perth, Australia, warn commuters to “Mind the Gap” the way the Tube does in London?

If so, this man failed to heed the warning, and might have lost his leg and even his life if not for the quick reaction and concerted effort of his fellow riders.

From the Australian Broadcasting Corporation:

“Transperth spokesman David Hynes said the man was boarding at the tail end of peak hour, but the train was still fairly busy.

” ‘We alerted the driver, made sure the train didn’t move.

” ‘Then our staff who were there at the time got the passengers, and there were lots of them, off the train, and organised them to sort of rock, tilt the train backwards away from the platform so they were able to get him out and rescue him.’ “

The man was fine, by the way, thanks to all those strangers.

Brigid Schulte of The Washington Post once teased me after I had said for the umpteenth time that I loved public transportation, saying something like, “I know you do, you communitarian, you.”

But this public transit incident is communitarianism squared… 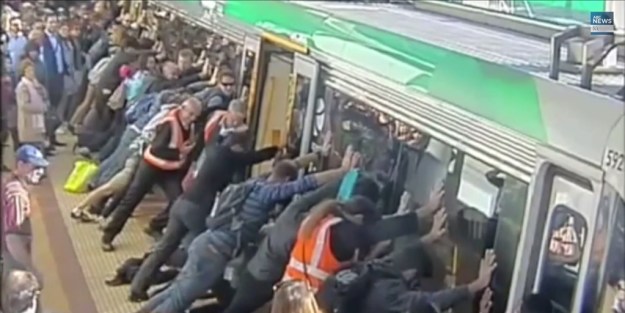 40 thoughts on “Mind the gap there, cobber! Crowd works together to rescue fellow commuter”