It’s apparently from a 2011 blog post by Adam Green, who describes himself thusly:

I am Vogue’s theater critic. I also write for The New Yorker, and I’m writing a book, too. So there you have it.

I first read this, xeroxed, in George Meyer’s legendary Army Man magazine, and it has stayed with me ever since. Its author, Burl Burlingame, still writes and reviews movies for the Honolulu Star-Bulletin. Whatever else he has done, or will do, he will always be remembered for the phrase “gassy, recently embalmed appearance.”

And then he quoted the review in its entirety. It was of the otherwise forgettable “Cannonball Run II.”

A sample of Burl’s immortal prose:

A minimum effort from all concerned, “Cannonball Run II” is this summer’s effort by Burt Reynolds and Hal Needham to get the public to subsidize a month-long party for Burt and his pals. The home movies taken during the party are edited into something resembling a feature film, at least in length. 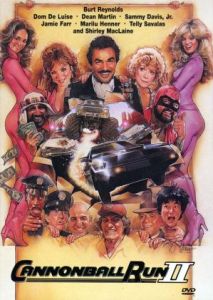 They’re asking $4 for admission, and that doesn’t include even one canape.
Burt’s friends are musty, dusty attractions at the Hollywood Wax Museum. They include Dean Martin, whose skin has the texture and unhealthy pallor of a cantaloupe rind and who says things like “When I make a dry martini, I make a dry martini,”—a sure-fire Rat Pack knee-slapper—and Sammy Davis Jr., who looks like a cockroach. Director Needham also never bothered to make sure Davis’ glass eye was pointing in the proper direction. It rolls wildly, independent of the other orb.
Other couch potatoes direct from “The Tonight Show” are the insufferable Charles Nelson Reilly; wheeze-monger Foster Brooks; Jim Nabors, who has swell-looking artificial teeth; and Don Knotts, who looks like a chimp recently released from Dachau….

I urge you to go read the whole thing, just to make sure you’re never tempted to call up this chestnut on Netflix or something. Oh, I’ll just go ahead and give you Burl’s ending:

The movie is a genuine cultural artifact, a relic given to us by a band of entertainers from long ago, who live in self-imposed exile in the dusty, neon hellhole of Las Vegas.
They seem to have no trouble amusing each other.
It’s not contagious.