Y’all know, from my frequent mentions, that I am a Patrick O’Brian fanatic, reading his novels about Capt. Jack Aubrey and ship’s doctor Stephen Maturin over and over again. You know, the ones set in the Royal Navy during the Napoleonic Wars. The best historical novels ever written.

Something that is much in the news the last couple of weeks rang a bell, so I went back and found the relevant passage in The Letter of Marque, the 12th novel in the series, and one of my favorites.

Here it is. It depicts a brief conversation between Maturin, a Catholic, and his good friend Nathaniel Martin, an Anglican clergyman: 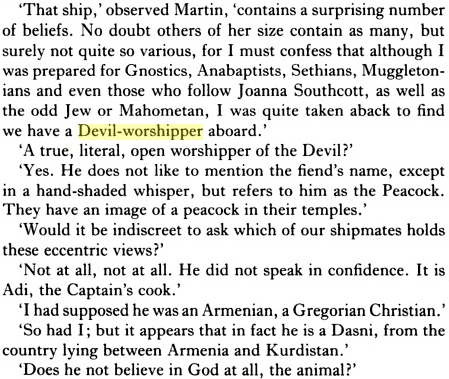 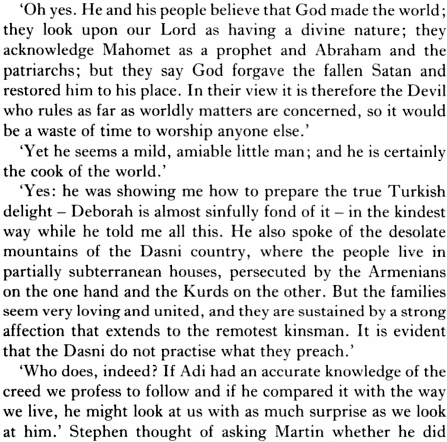 I checked, and my hunch was right: The Dasni are the very Yazidi people whom we are trying, with our air strikes in Iraq, to protect from ISIS. Wikipedia, under its Yazidi entry, cites this description:

Yezidis (Arabic) [possibly from Persian yazdan god; or the 2nd Umayyad Caliph, Yazid (r. 680–683); or Persian city Yezd] A sect dwelling principally in Iraq, Armenia, and the Caucasus, who call themselves Dasni. Their religious beliefs take on the characteristics of their surrounding peoples, inasmuch as, openly or publicly, they regard Mohammed as a prophet, and Jesus Christ as an angel in human form. Points of resemblance are found with ancient Zoroastrian and Assyrian religion. The principal feature of their worship, however, is Satan under the name of Muluk-Taus. However, it is not the Christian Satan, nor the devil in any form; their Muluk-Taus is the hundred- or thousand-eyed cosmic wisdom, pictured as a bird (the peacock).

The boldfaced emphasis is mine.

So you see, my obsessive study of these novels is actually educational.

O’Brian was obsessive about detail, and took a certain delight in depicting interesting, little-known religious practices. You see a reference above to the Sethians, of whom I had never heard. They play a significant role in two or three of the novels, making up a significant portion of the crew of Surprise during her time as a private man of war.

But as obsessive as he was about detail in depicting real-life naval battles, such as Cochrane’s victory in the Speedy over the Gamo, or Broke’s in the Shannon over the USS Chesapeake in 1813, he would sometimes invent entirely fictional places. For instance, the Sethians (a real, though obscure, gnostic sect — the apocryphal Gospel of Judas is considered a Sethian document) who serve under Aubrey are from the fictional town of Shelmerston.

But it’s fascinating to learn that the Dasni are for real.

4 thoughts on “Patrick O’Brian’s depiction of the Yazidi, a.k.a. Dasni”