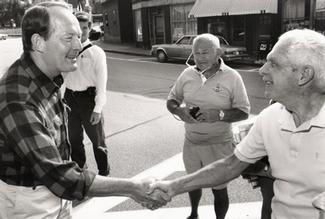 I got this email yesterday…

I am a staff writer for Governing Magazine and came across your blog while doing some Googling about Lamar Alexander’s walk across Tennessee. (Governing covers state and local governments across the country and our audience is largely elected officials/public employees.) I’m working on a fun piece for one of our upcoming issues about the political stunt of walking and was wondering if you were available this week to chat about the topic as you covered Alexander’s campaign in ‘78. The piece will take an overall look at some of the more famous “walks” by pols – from Missouri’s Walkin’ Joe Teasdale to Illinois’ (aptly named) Dan Walker, the public stroll has been a popular political tool. More recently, Adam O’Neal, mayor of the small town of Belhaven, N.C., took a 273-mile trek to Washington, D.C. to protest the closing of his local hospital. President Obama this spring took an impromptu stroll to the Dept. of the Interior for a meeting.

I’d love to hear your take on the effectiveness of Alexander’s 1,000-mile walk and how it resonated with people. And I’m also curious about your broader thoughts on the gimmick as a whole. How effective has this type of stunt been? Who’s done it right and are there pitfalls?

Are you available Wednesday or Thursday for a phone call? Or you can always reach me directly at the number below.

… and I talked with Liz for about 20 minutes this morning.

I didn’t have anything really profound to say. Here are some of the points I hit on:

I wished I could have put my hands on one story I wrote, right after Alexander won the 1978 election, which ran on the front page of The Jackson Sun. It was an exclusive, and one of the best stories I wrote during my brief time as a reporter. It was Alexander’s own account of how he had come back after defeat four years earlier. A week or two before Election Day, at the end of a long day of campaigning, Alexander and a reporter from the Tennessean were relaxing over a drink on the campaign plane on the way back from an event at one of the far ends of the state. (We had access to candidates in those days that reporters only dream of now, and our papers thought nothing about paying a pro-rata share of the plane rides.) Alexander just started talking about how he come to that point, and the Tennessean guy just listened and enjoyed his drink, and I took notes like mad. Even John Parish, the gruff dean of Tennessee political writers, praised the piece I got from that eavesdropping.

That probably would have provided Liz with some insights, but this was years before electronic archiving. That clip is probably moldering in a box in my attic somewhere…