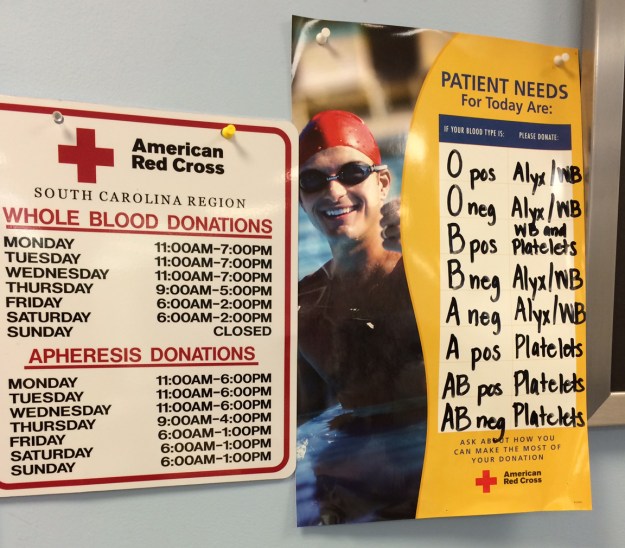 Here’s what the Red Cross needed as of last night, plus the times of operation…

Yesterday, I had been scheduled to give my regular donation of double red cells, but at the last minute, the Red Cross called to ask me to give platelets instead, because that need was even more dire.

So I did. It was my first time. And I’ll admit, this was somewhat harder than giving whole blood or double red cells. It’s kind of like the double-red experience, in that they pump your blood out, then pump it back into you with certain elements removed. But instead of doing all that through one needle, it takes two — one in one arm, the other in the opposite hand.

And worse, it takes 90 minutes. By which I mean, 90 minutes from the beginning of the pumping process, which in my case was well over an hour after I arrived at the donation center on Bull Street. So I was there more than three hours, and the 90 minutes of almost complete motionlessness while I was hooked up was a new adventure in tedium, I’ll admit.

So I can see why more people don’t do it. But it’s needed. So I’ll do it in the future. Next time, I’ll take my iPad and watch Netflix.

But hey, help me out, and more importantly, help out your community. At the very least, go give whole blood, which is like falling off a log compared to this. (I once did it in a little more than five minutes.) Go, and give….