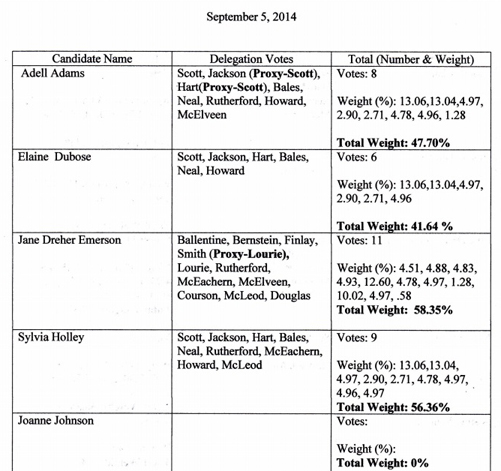 A screenshot from the minutes of the Sept. 5 meeting.

OK, now I have an answer to the burning question of who voted to keep incumbent Adell Adams on the Richland County election board. Here they are:

Here’s a link to the entire minutes, which include how everyone voted. The minutes were emailed to me this morning by Kimberly Janha, the legislative services coordinator for the delegation.

And once the strange weighted voting was fully tabulated (senators got more than representatives, and they were also weighted by the proportion of their districts in the county), here’s how the candidates fared:

You’ll see that Ms. Adams was the only one elected with less than 50 percent — whatever that means, with this odd weighted system.